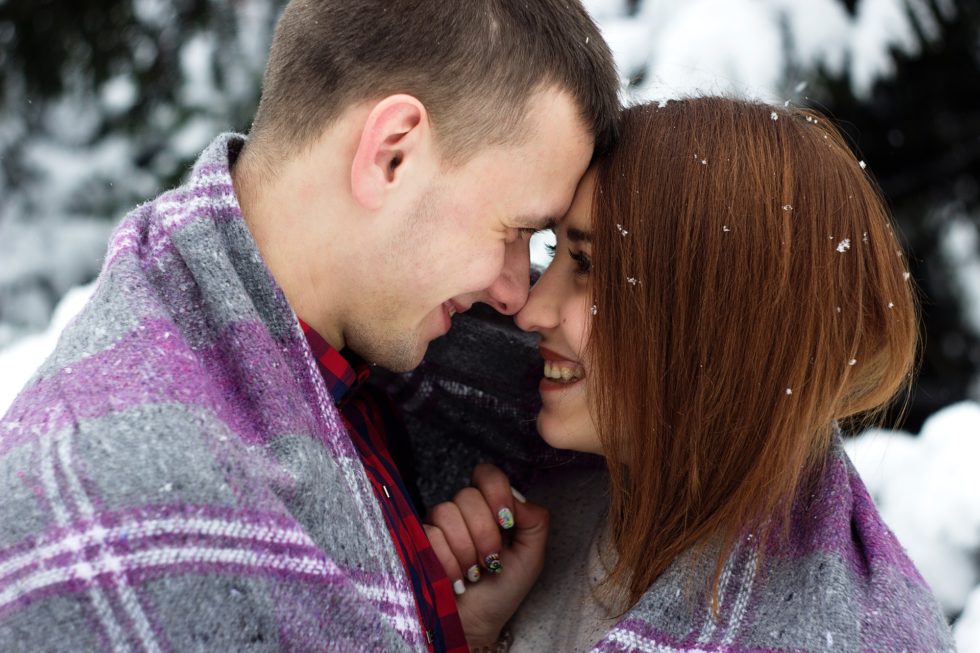 To be a good boyfriend or husband, you must first recognize one thing: You are mostly an engine of pure mistake. Guys are born from women, who are remarkable in their ability to retain facts, organize things, clean the house and use thoughts in a contiguous fashion to do things correctly. Once we leave the womb, we begin our slow transformation into organizational nightmares. Some of us are lucky enough to be good at some things—sometimes we’re clean, sometimes we remember things, sometimes we’re sweet, sometimes we hear things when we’re being talked to directly, face-to-face.

Sometimes we’re thoughtless dipshits who can barely string together the correct response to questions like, “What’s our anniversary?” and “Did you do [that thing you were meant to do a week ago, which was not urgent then but is now]?” For the most part, we’re never the right combination of things unless we frankly commit relationship fraud. I’m not saying you should go and cheat. I’m saying you should prepare yourself for your own terrible deficiencies.

Most guys are pretty bad at romance. You must sacrifice yourself to the process. You must admit your faults. In fact, that’s Step 1. Admit that sometimes you forget things or that occasionally you have a wandering eye, and you just aren’t that great at communicating those faults.

The best piece of advice I’ve ever given in business or life is to learn what you suck at. It’s humiliating. It’s saddening. Some guys going through the process experience a great deal of anger, which is also a thing they’re shitty at.

Failing to admit that you’re shitty at some things.

The best piece of advice I’ve ever given in business or life is to learn what you suck at. It’s humiliating. It’s saddening. Some guys going through the process—even when it’s just talking to a therapist or to themselves—experience a great deal of anger, which is also a thing they’re shitty at. It may be worth making a list, just once, and evaluating what you do well and don’t do well. This isn’t to say girls don’t do things wrong, but as guys, we’re forgetful beasts. Or at least I am.

So I know Tony Stark was a womanizing ass who took one good movie and then one really badmovie to work out that Pepper Potts loved him dearly, but I’m really referring to the suit. We live in a world where if you write down something on one computer it can magically appear on another computer. That’s right: Take notes. The truth is, you can’t reasonably remember everything.

If you’ve got an iPhone, use iCloud. If you’ve got Android, use Google Keep. If your one true love says, “I really love these flowers!” or “My ring size is four!” you should write that down. If she’s a huge fan of something you cook her, write that down. Hell, write down her birthday, your anniversary, your wedding anniversary, the first restaurant you went to, her favorite chocolate and if she says, “Hey, I really want that thing I saw.”

Organize it simply: Important info first (i.e. first date, relationship anniversary, marriage anniversary, proposal anniversary, her birthday, parents’ birthday and names, where you first met), then her favorite things (flowers, chocolates, food, restaurants, Pearl Jam), her least favorite things (bears, scary ghouls, drop bears, Blink 182) and then the things she finds super romantic like songs or places, and so on. Some of these things can be put into your phone’s calendar to alert you with push notifications.

This may sound like a serial killer’s handbook, but the truth is that even in years-long relationships, you’re going to forget things. What you’re actually writing is a recipe book for a great relationship. Want to kick ass at Valentine’s Day? You now have a rough list of what you can put together to make it super awesome. Is her dad’s birthday coming up? That’s something you know.

If you think this is manipulative, ask yourself a simple question: If you remembered this off the top of your head, would you use this information to say, tell her to wish her dad a happy birthday? Or would you just say, “Who cares?” If it’s the latter, congratulations on being the Pinto fuel tank of boyfriends. Even if you just say it, it means a lot. It’d mean a lot to you, if you cared about your dad.

If you see a girl with big jubbly-wubblies and you just can’t stop staring, stop staring. A girl walks in with legs from here to the moon? Don’t look. Look away. Make it a second.

Saying other girls are hot, even online.

Many men have this thing where they can’t not say, “That girl’s hot.” If you’re in the type of relationship where that’s been established as “OK,” good. These standards should be set quickly. If you say it and she explodes, just shut the fuck up you goddamn idiot.

I see so many men who say these things in front of their girlfriends who then look at them like they just said, “Hm, I could really go for an enema right now.” These guys continue in oblivion and complain later in the night that their “girl went crazy over something small.”

Newsflash my good man, she is in a monogamous relationship with you and you just said someone who wasn’t her was attractive. She is now jealous, as you would be, offended and understandably pissed off at you. You’re an idiot. There’s no easy way out of this conversation beyond admitting that you’re an idiot and she’s the best thing in the world.

This also counts for staring. If you see a girl with big jubbly-wubblies and you just can’t stop staring, stop staring. A girl walks in with legs from here to the moon? Don’t look. Look away. Make it a second. If you need to train yourself to do it, get Mr. Miyagi in here and get him to slap you in the jaw. It’s not difficult. You just don’t look at it. Don’t snap your neck like you just saw somebody drop a deuce at the bar, but just look past it. I can’t help you with your base instinct of “Me want bone that,” but I can help you with your stupidity. Also, randomly liking and chatting up some girl on Facebook or Instagram who she does or doesn’t know is also going to creep out your girl.

I know tons of men who remain friends with their exes. I’ve never understood it, as by definition a relationship is romantic and just not being romantic anymore is a bit weird. Nevertheless, people in general seem bad at cutting connections, but you may need to get used to it. I’m going to say that 90 percent of the time no girl is a fan of you keeping the number of or talking to your ex. Some girls aren’t jealous and are totally fine with it. That’s great. Just remember that the following are considered cheating with an ex or any female friend:

Basically stuff you’d do if you were in a relationship with them and not your girlfriend. In the case of your female friend, she needs to meet your girlfriend so said girlfriend can size her up. I don’t know what happens there. It’s confusing. In the event that your girlfriend finds the girl a threat, you want to, if possible, have them talk about it, together, with you there. If they won’t, you’re going to have to make the uncomfortable choice between girl and girlfriend.

You also may want to ask the reasonable questions: Is your girlfriend being unreasonable? Is your girlfriend actually potentially bad news? Or, is your friend actually into you? Guess what! There’s no answer. You may have to lose a friend. Pushing your girlfriend to let you keep a friend who makes them uncomfortable because you’re Mr. Stubborn And Your Friends Are Your Friends (versus a “this is my best friend” situation, which is different) will never work and always end badly. Especially when/if you get married and that person is there.

By all means, if you’re about to rip off your own arm and beat someone to death with it because you’re so angry at her or embarrassed, simply say, “Can I have five minutes to just calm down?” Whatever you do, don’t leave the room.

Some girls love public displays of affection. This means holding hands and pecks on the cheek or the mouth. This does not mean that you should shove your tongue down her throat in the queue at Arby’s, or grab her ass because a guy who looks better than you looked at her, or grab her boob because you just love yourself some boobs. Don’t do it. Girls don’t like it. She’s not your property.

So, you’re pissed off at her. So, she’s pissed off at you. In both of these cases, don’t go quiet. By all means, if you’re about to rip off your own arm and beat someone to death with it because you’re so angry at her or embarrassed, simply say, “Can I have five minutes to just calm down?” Whatever you do, don’t leave the room. Unless you go to the bathroom (and leave your phone behind so she can see you’re not gonna go in there and text someone about it), just sit there and cool down. Remember—you love this girl, and even if you fucked up, she wants to have a conversation about it and chat about your issues. She may yell at you. That’s bad! But you know what’s worse? You walking away or not talking about it. It’s a recipe for a goddamn nightmare.

Talking to either of your families about problems in your relationship.

This is going to be impossible to do 100 percent correctly, but you should never talk to your family about an argument between you and your girlfriend. Once in a while I’m sure you’ll say, “Shit, my girlfriend and I had an argument and X happened” to your brothers or sisters, and that mostly makes sense. But, even then, that’s thin ice. As part of your family they’re going to most likely be on your side, and now they know about your damn problems. Even if it’s a minor problem, they don’t get much of a view into your life beyond when you two are together, and now there’s this extra bit of (negative) information.

I can’t believe I’m typing this but, goodness, don’t talk to her family. Or your parents. This is your business. This is your house. This is your problem. This will cause horrible problems. They will give her shit, or they will judge her. It will suggest your relationship is in trouble. It will make her distrust you, and frankly shows that you can’t deal with things in your own house. The only exception I can think of is pure desperation—she’s dying and won’t get help, and won’t listen to you.

Like I always say, if you’re nodding along, good work. If you’re not and you’re mad at me, I probably don’t care. Sorry.