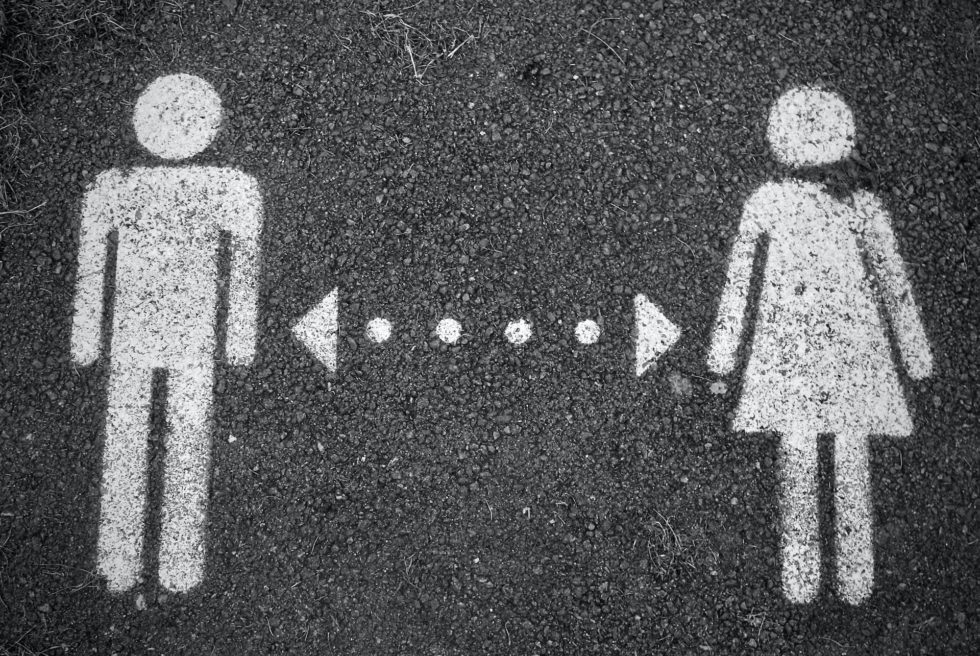 It is a man’s job to sexually escalate with a woman he is attracted to. As women control access to sex, he risks rejection in his quest to get it. Indeed, if women are appropriately discerning in their choice of sexual partner, most men will be rejected most of the time. Even hard core players confess to a 90% failure rate. Their strategy is based on volume rather than quality of approaches.

Many women feel entitled to audition would-be lovers very selectively. If they experience a lack of attention – no guy shows up to audition – they blame men. If a guy does show up but decides not to stick around, he’s a douche. That’s not reasonable. You have no right to call a guy a jerk just because he doesn’t like you. Maybe you need to be more likable, or maybe you’re not compatible despite the initial chemistry.

The problem with this sense of entitlement is that it creates total passivity on the girl’s part. You don’t have very good control of your dating life if you are always waiting for a call or hoping the perfect guy is going to see you from across the room and say to his buddy, “See that girl in the red dress? I’m going to marry her.”

Usually this dilemma is addressed by encouraging women to make the first move or ask a guy out. In other words, we encourage the female to usurp the male role in hopes of nudging the process along. It seems only fair in the post-feminism era. This can certainly work, and in surveys a large majority of guys say they would love to be asked out by a woman. On the other hand, there are limitations to this approach, which runs counter to the natural order of things. 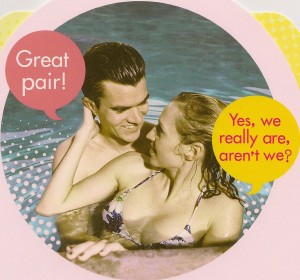 A much better approach is for the woman to do her job, which is to escalate emotionally. Women want emotional intimacy during sex, but they have sex before creating a foundation of emotional connection. Doing that work is your job, not his. If you hope for commitment, it makes no sense to leave it to chance, dreaming that a guy will fall for you based on your looks alone, or because you’re good in bed. A man will offer commitment when he is sufficiently emotionally invested to make the tradeoff to forfeit sexual variety. Women are the ones who have the power to create that investment.

How to Escalate Emotionally with a Man

Evolutionary psychologist David Buss surveyed American men to ask them which traits they consider most important for long-term mating. Out of 67 named traits, the number one priority for men was sexual faithfulness. (This is why guys are judgmental about your number – it’s a proxy for predicted future behavior.) Reader Lokland shared a valuable personal insight:

In the intial dating phase (say 6 months) the guy will be subconsciously (potentially consciously) looking for reasons to rule you out as a girlfriend.

One of those disqualifiers would definitely be trying to garner attention from other males. Call them faithfulness tests which utilize a pass-fail system initially.

Biologists believe that jealousy evolved as a way for males to prevent being cuckolded by other men. Jealousy reduces the likelihood that a woman will cheat. However, men hate feeling jealousy. Many will end a relationship with a woman they’re crazy about if they feel jealous and insecure about her level of interest.

Too often, women rely on this tactic to enliven a man’s interest. At best, it’s a short-term solution. Good relationships are never made this way. Men at HUS have said repeatedly that they want a woman to be hard to get for everyone else and easy to get for them alone.

That means you need to go all in with exclusive interest before he does. He will only be exclusive with you after you have demonstrated that you are 100% exclusively focused on him.

2. Be consistently curious and interested to learn more about him.

Reader Hope shared some excellent ways that a woman can show genuine interest in one particular man.

You need to calibrate your level of interest to suit the progression of the relationship. Don’t get way ahead of him, just draw him out gradually from the start to make your interest in him as a person clear. As Hope said, there is a risk here:

The problem is, I think most women who do open up find that they are emotionally investing as well, which can lead to irrational decision-making/hamsterwheeling if the guy turns out to be a rotten egg. : /

This is where women risk rejection. You can minimize your risk by screening carefully for traits that indicate he is a good guy who is open to a relationship. As Hope pointed out in a comment, sociopaths don’t open up emotionally – if you’re showing clear signs of emotional investment and he’s holding you at arm’s length, drive on. Another warning sign is when his behavior is inconsistent. He’s warm and cuddly when the two of you are alone together, then you meet up in a group and he avoids eye contact. No bueno.

3. Ask for his advice, support or help.

One of the ways that women bond and establish new friendships is by revealing vulnerabilities to one another. When a woman shares a confidence or asks advice from another woman, she is signaling that she likes her, trusts her, and wants to increase the intimacy in the relationship. Often the other female will respond in kind. This works with men too.

It can be a problem you want to talk out, or a request that he help you put your IKEA furniture together. We all like to be needed, and we increase our emotional connection to others when we do kind things for them. He will probably like you more if you give him the opportunity to help you out.

4. Be generous and appreciative.

Men love to be appreciated for their efforts and for investing in a woman, including monetarily. Too often women take men for granted when it comes to paying, or doing them favors (see IKEA request above). Reader J shared some great suggestions:

I think a woman can and should do the following things if they are an honest representation of her feelings:

1. Say thank you. (Sounds like nothing, but it’s actually huge.)
2. Say she enjoys being with the guy, is having a good time with him.
3. Give honest compliments.
4. Reciprocate the cost of dates with small favors, gifts of food, handmade items, etc. (Bake a cake, knit a sweater.)
5. Give presents for occasions like birthdays and anniversaries (the latter only if it is not too cloying or desperate looking.)
6. Be physically affectionate in non-sexual ways (hold hands, place head on shoulders or chest, etc)
7. Small acts of consideration. Ever see Chaz Palmentieri’s A Bronx Tale? The young narrator is told by a mobster that the test of whether or not a woman is a keeper is if she leans over to unlock the driver’s side door after the guy lets her in on the passenger side.

IME, that’s the sort of thing that attracts guys who are looking for a wife or LTR.

One thing that really gets guys going is a girl who is positive, full of life, and laughs a lot. A pretty girl smiling a genuinely happy smile as she looks into his eyes for a long time — that makes a man melt. I’ve never had a guy compliment me on my frown, but I have been told that my face lights up when I smile. A positive girl makes people around her feel more energized, which is very attractive. No needy, clingy, bitter, depressed or unhappy vibes.

6. Let him know how much you like him, and how sexually attracted you are to  him.

Again, this is where the risk of rejection happens for women. That’s OK, because it’s your job in the mating dance. This is where you lead. Go out on a limb. Say what you need to say.  This is the one that sealed the deal for me with my husband, by the way.

Reader Anacaona shared a great example of this. She had a strategy for meeting a man, and when she found one she liked, she made it very clear. Even though he was in another country, she made it easy for him to want to commit to her.

I was honest about how things were progressing for me. I sent the first message online, and in February when we had accumulated several hours online I sent him a Valentine. I think that made my husband feel more confident to pursue me further, especially because  in the USA men are expected to give Valentines while it is more or less optional for women.

Also, I have high emotional intelligence so I discovered his likings and remembered them and asked him a lot about them. I also asked him about his old girlfriends. This is a good technique to connect with a man’s emotions because for most men, women in his past occupy a special place so sharing these important emotional milestones with him makes you special to him.

I never asked him for presents, except when he came to visit me the first time I told him that I wanted something he made himself and that I can carry with me at all times. He made me a silver ring that ended up becoming my engagement band. Once we decided he would come and visit, I asked to share expenses 50/50 because I knew it was a big expense for him.

As I mentioned earlier, he is going to escalate sexually. He is probably going to try for sex before your relationship is as emotionally intimate as you would like. This is the inevitable struggle between males and females. Again, you have a job to do. If you are nurturing the relationship emotionally, and feel that you are not yet ready to have sex, you should say so.

BUT. You should also tell him that the throbbing between your legs is about to drive you insane, and that you look forward to keeping him up all night. Also, as we’ve discussed here many times, he is not going to want to wait if other guys haven’t. If you are not a girl who does casual, make that clear, so that he knows there’s no price discrimination.

Although it’s obvious, it bears mentioning that there are ways to please him sexually as you become secure in his affection. Be very clear about how desirable you find him, and for heaven’s sake bow down and worship his cock. He will reward you emotionally.

By the way, a lot of what’s described in this post is what men call femininity.

Each sex has a job to do in finding the balance between sex and commitment. Embrace your role and your responsibility from the start. Nurture the emotional connection from the moment you meet someone. It’s never too early.