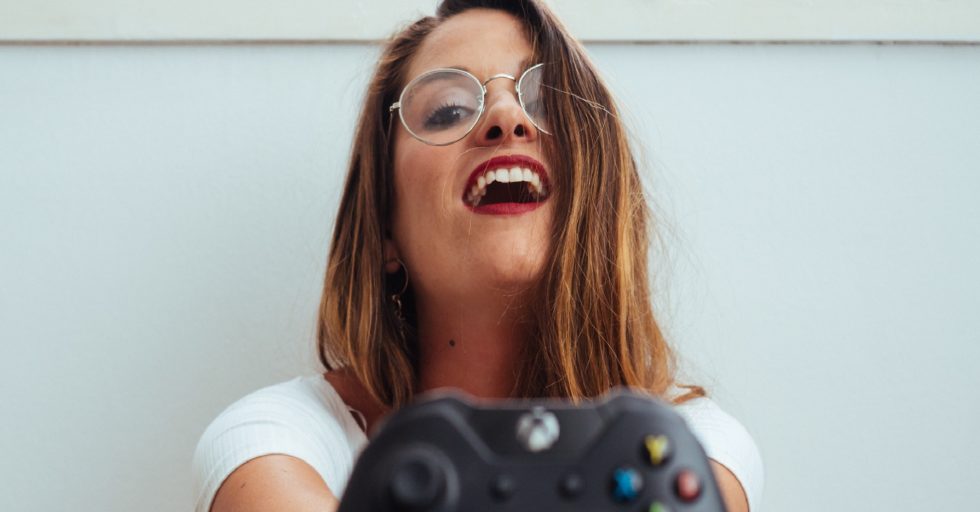 Remember when video games were just for boys and finding a girl gamer was like seeing a unicorn running in the woods? Well I’m happy to say times have changed video games aren’t just for the boys and now more than ever women are starting to leave their mark on the gaming world. I’ve loved video games since I was a little girl. Classics like Super Mario Bros. Mortal Kombat and Donkey Kong kept me occupied when friends weren’t around and with advancements in technology I’ve fallen back in love with the art of gaming. There’s just something about entering a new world, having an objective and seeing it through that’s so satisfying. It may be silly but it’s fulfilling and there’s nothing like the rush of beating someone’s high score. When real life feels like a constant battle it’s nice to jump in a game and win a war.

It doesn’t matter if your gaming experience stops with Angry Birds and Candy Crush you can become a girl gamer and start playing with the big dogs. Trust me, your boyfriend will love it and you can piss off all those people that say girls only like shopping and fashion. I’ve put together this little guide to help you on your journey, get you prepared and with some practice maybe you’ll be the next high score I’m gunning for.

You can’t jump into the gaming world without at least knowing some of the basics, trust me you’ll be eaten alive. First things first, if you don’t have one already you’ll need to invest in a gaming console, they aren’t cheap so be prepared to spend some serious cash. Xbox, PlayStation, and Nintendo U, everyone’s got their favorites and as you start to play more games you’ll find your own preference but for any serious gamer Xbox and PlayStation are the main contenders. If you don’t want to rush in and buy one don’t worry about it, I’m sure someone around you has one of the two, so take some time and try them out before you make a purchase.

If you’re a novice gamer it’s easy to assume all video games are the same, never and I mean never say that again. There are different genres of video games just like movies and once you find your niche finding new games becomes much easier. There are literally tons of different titles so instead of writing a novel length description I’ve provided a little chart below peep it:

The list could go on but when you first jump into the gaming world these are the types of games you’ll probably encounter. Don’t feel pressure to get the most popular game, find something that relates to your interests. If you don’t like gory violent stuff don’t spend 60 dollars on a war game, you’ll only hate it and give up playing. Take some time playing the single player and training options and get comfortable with the controls and interface. Nothing is more frustrating than dying because you don’t know what button to push.

Once you get into the swing of gaming you’ll start to find your favorites, you may even find you only like one game, that’s fine. Being a girl gamer doesn’t mean you have to master everything. As you become more comfortable playing you’ll want to check out the online features, they’re awesome and I encourage you to jump in, but this wouldn’t be an accurate guide if I didn’t warn you.

Prepare for the Haters and Creepers

Almost every game has an online multi-player option allowing you to connect and compete against players from all over the world. Each game has a little community, and it really is amazing, and I suggest you take advantage of it, just brace yourself. Gaming is still a male dominated world and most of that world is dominated by pre-pubescent boys that love to bash and talk shit, so don’t let that put you off. Comments like “you’re good for a girl” and “you must be a fat ugly loser” are very common. Let’s face it, men have a hard time when woman are better at anything, video games are no different. The best way to handle negative comments are to ignore them. You don’t have to play online with the headset, I leave mine off and let my playing do the talking. I mean really who gives a shit what some tween in Idaho says about your score. Eventually they’ll shut up, realize they’re not getting any attention, and fade back into basement they popped out of.

When you’re not dealing with the angry trolls you’re bound to encounter the creepers. They’ll ask for pictures, leave inappropriate messages and sometimes send pictures. Don’t ever open them, you can’t erase those images, believe me I’ve tried. Girl gamers have to deal with a lot of stereotypes, too. You’re either a monster with no friends or sitting at home in panties and fan gear just waiting for the perfect gamer guy. It’s sad but not at all surprising. As a girl gamer I suggest you treat the gaming community like any other internet tool and use caution.

Anytime you start a new hobby you want to be the best but that doesn’t happen overnight. I’m extremely competitive with myself and if I get stuck on a level I get frustrated and tend to scream at the TV screen. When I started out I wouldn’t allow anyone to help me, everything was about the win and I didn’t want someone else to take credit. I was crazy, but you don’t have to be, so set ego and pride aside and ask for help when you need it. If your boyfriend plays have him teach you some tricks, he’ll be excited to show you what he loves and you can make a really fun date night out of it. It’s a hobby and getting into gaming should be for fun so take it or yourself too seriously. Beating yourself up for having to repeat a level is silly, I’ve never met anyone who excelled immediately. Remember everything takes time and practice be patient and before you know it you’ll be teaching one of your friends.

Keep it in Control

Once you get into a game and start excelling it can be hard to put it down. Don’t spend all your free time sitting in front of the screen, make sure you take breaks and check back in with reality. Gaming should never become an obsession and if your eyes start to turn red and burn, it’s time to put it down. I’m no different, I’ve been a girl gamer for a few years now and when I get a new game the only thing on my mind is beating it. It’s a sickness that stems from my crazy competitive nature, but I manage it. Whether you’re new or veteran girl gamer, it’s important to manage your time and set limits. You don’t want to turn into a couch potato and lose touch with the real people in your life.  Go outside, run in a field, stare at some butterflies and then come back and whoop some ass.

Now that you’ve got the basics on becoming a girl gamer it’s time to get to your local game store and pick out your new addiction. Treat yourself and indulge in some fun, who knows you might even make a career of it!