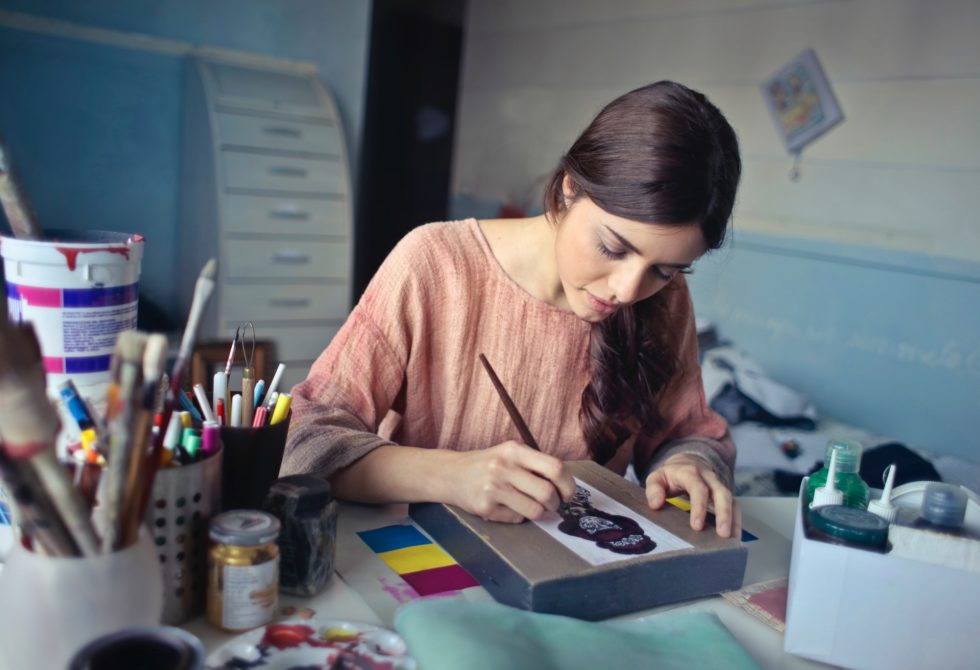 Artist chicks are a rare breed. At first glance, they seem possibly boring, probably bitchy and definitely annoying. But behind those horn-rimmed glasses, underneath those layers of paint on her hands and beyond the mumbo jumbo art terms she’s spewing, there lies a passionate and wild girl who wants your paint all over her canvas. It’s not going to be easy, though, so here are some pointers:

An easy way to impress an artist chick is to raise controversy every time you talk, and the best way to do that is to be a hater . There are completely divergent view points in the art world, but the one thread that binds just about all artists, art critics and people in that world in general is a healthy serving of HATE. You can’t throw a stick two feet in an art gallery without hitting someone making a negative comment. If you want to impress an Artist Chick, hate stuff. “God, Van Gogh is so overrated.” “Ugh, I LOATHE Leonardo Da Vinci.” “The Sistine Chapel is SO UGLY!” You’ll get extra points with her if you wait until she says she likes something and you respond, “Really? You like that? Weird.”

2) Whatever You Really Feel, Say The Opposite

You see a pair of stained underpants mounted to a wire hanging from a museum ceiling. Your normal reaction? This is effin’ stupid. So you MUST say, “This is brilliant.” You see a gorgeous landscape painting that catches the beauty of the setting sun so well that you’re getting almost teary? “This is effin’ stupid.” Say the opposite of what you feel because, in part, the art world (and artist chicks in particular) is fueled on contrarianism. But also, in general, the more you know about a subject like art, the more your viewpoint diverges from the “mainstream.” You’re presumably not there yet… you know your primary colors and that you shouldn’t eat lead paint and that’s about it. So the best way to fake it like you know it is to say something against your better judgement. Don’t worry, you can hate yourself the morning after.

3) The Poorer You Seem, The Hotter You Become

Most artists never make money while they’re alive. If they’re really lucky, they’ll make a shit load — right after they die. Suffering for your art (and for art in general) is key to the artist lifestyle. Now you don’t have to quit your job, burn your money and live out of a bus “Into The Wild” style to bag an artist chick — no one over the age of 17 gets laid on a bus. But you can fake the funk and still get away with it — show up to meet your Artist Chick unshaved, unshowered and with no money in your wallet and, for once in your life, she’s gonna get wet.

Sample: “I was thinking about the Aesthetics of the new Detroit Lions logo and I think, while it’s really lacking in Craft and Intent, Contextually, it’s really quite brilliant.” Okay, so maybe that one won’t work, but don’t worry… no one knows what any of these words mean anyways. Just make sure to use them and use them often in front of the Artist Chick you’re trying to bag.

The artist uniform has some basic musts: vintage, shirts with horizontal lines, bright colors and one weird prop. Jackson Pollack wore horizontally striped shirts. Picasso wore Panama hats. Salvador Dali had weird mustaches. Andy Warhol wore a big white wig. Artists pride themselves on their individuality and often dress like they’re individuals too. If you look sharp and have one visual “gimmick” in your ensemble, you’ll be instantly more memorable to your Artist Chick. Just don’t let your homies see you dressed up like an artist. You won’t be able to live that down, EVER.

Remember that scene in “Ghost” when Patrick Swayze (RIP) and Demi Moore (RIP… I kid, I kid) are making that sculpture together and then they start boning all on top of the clay? Sure that scene was ridiculous, but it was really not that far fetched. There’s something about creating something (even the dumbest piece of crap) that gets an Artist Chick’s (most likely) oversized panties as moist as a Cezanne landscape. Put some pipe cleaners, glue and a broken-down cardboard box in your bag and at the opportune moment, drop the “C” word to your artist chick. You’ll be “Collaborating” in no time. And by “Collaborating,” I of course mean fucking. Oh, you figured that out on your own? Nice!

7) Invent What You Think A Piece of Art Means

Some think Warhol’s soup cans are a comment on commercialism. Some think it’s a comment on fame. Some think it’s a comment on soup. Truth is, no one knows. The “meaning” of a work of art is a beautiful thing because unlike at Wal Mart, the customer is actually always right. This might sound ridiculous, but if you’re at a show for your Artist Chick, go right up to her and start telling her what her work means. “This painting of an old lady is saying a lot of interesting things about fascism. And that still life of the bushel of oranges? That’s deeply symbolic of child birth.” Get ready to have your mind blown, because she’s not only going to agree with you, but she’s going to be grabbing your ass too.

8) Hit Up A Gallery, Skip A Museum

There is free food and alcohol at galleries. There is no talking and fat tourists at museums. No brainer here.

9) Be A Really Good Artist. Or A Bad One

If you’re actually a great artist, you’ll have an Artist Chick in the bag in no time. There’s nothing that gets those paint-soaked overalls onto your bedroom floor faster than being great at something she deeply cares about. But here’s the weird thing about art these days — “Good” doesn’t mean much. If you can’t draw the human form, don’t apologize. Jean-Michel Basquiat couldn’t draw for shit either and that guy got laid all the time. Whatever your talent (or lack thereof) is, as long as you’re confident (or pretend you are), she’s going to be mouth-washing your paint brush in no time.

10) When All Else Fails, Go For Sculptors

If you run into a line of frigid Artist Chicks, just seek out a local kiln. Modern art sculptors are the most under-appreciated artists living today… they work in dark, hot rooms and no one gives a damn about their work. Bring a female sculptor a sandwich, and you probably have a fuck buddy for life.