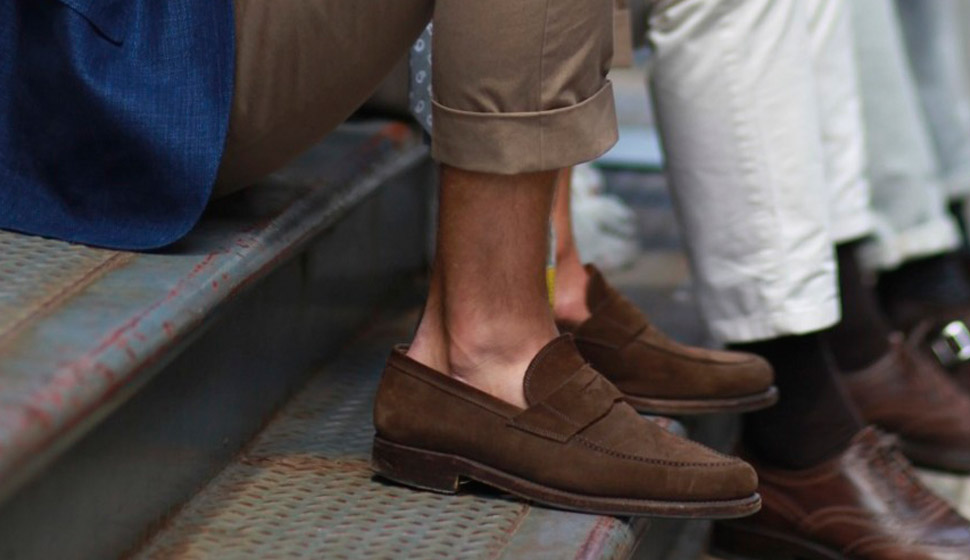 It not only looks bad, but also it is downright nasty. Here’s why.

Something terrible is happening in men’s fashion: Men are rolling up their trousers, slipping on leather dress shoes, and leaving their socks at home. Countless shopping sites display happy, deliriously cool men hanging out on urban stoops with their exposed ankles dipped into leather stink factories.

The fashion world is telling men that this is the new dressed-up casual in the same way we all decided blazers with jeans are okay (they are, by the way, but there are rules and we’ll get to those another time).

And men are buying it.

“When you wear dress shoes without socks, you look unfinished. You look like a man-boy in a short suit. You look like a guy named ‘Blake’ who wants to tell you about his yacht that never leaves the slip.”

I can understand the appeal. This look (which is nothing new, by the way) aims to say: “Hey, I’m wearing my nice shoes, but I’m a casual guy and it’s summertime. I’m your buddy. I don’t take this dress shoe thing too seriously. Hang out with me.” I get it: It’s hot outside, and feet get hot. Surely rolling up the pants and leaving your foot to breathe a bit more will cool you down, right?

No. Not only does it look bad, but it also is downright nasty.

First, on the looks. The shoe-with-no-socks look is what happens when you have to take the trash out minutes before the Sanitation Department shows up and the only nearby kicks are your leather loafers you left near the door last night. Or maybe you’re grabbing the paper (does anyone do that anymore?) and you have some old docksiders sitting around. Maybe you’re just making a run to the corner bodega. Whatever your excuse, the no-socked leather shoe is a temporary solution, and your bare feet should be removed from your leather shoes as soon as possible.

When you wear dress shoes without socks, you look unfinished. You look like a man-boy in a short suit. You look like a guy named ‘Blake’ (apologies to the nice Blakes out there) who wants to tell you about his yacht that never leaves the slip. You look like Don Johnson in his Ferrari days, and only he can have those. Let him have them. He needs something.

Feet sweat. Sweat breeds bacteria. Bacteria stinks when it poops after eating your sweat. Closed-toed shoes are foot-sweat saunas. Leather is especially good at soaking up sweat and allowing bacteria to do its thing (it’s moisture-hungry dead skin, after all). So you wear your leather shoes with no socks one day, dump a bunch of sweat in there, let it cook over night, and then put your feet back in there like it’s some kind of freeze-dried ramen that’s been waiting for some hot liquid to re-activate its foulness.

That’s right: When you slip into those cool-casual leather loafers in the morning, you’re activating instant foot fromageries.

Can we stop this? Thanks.