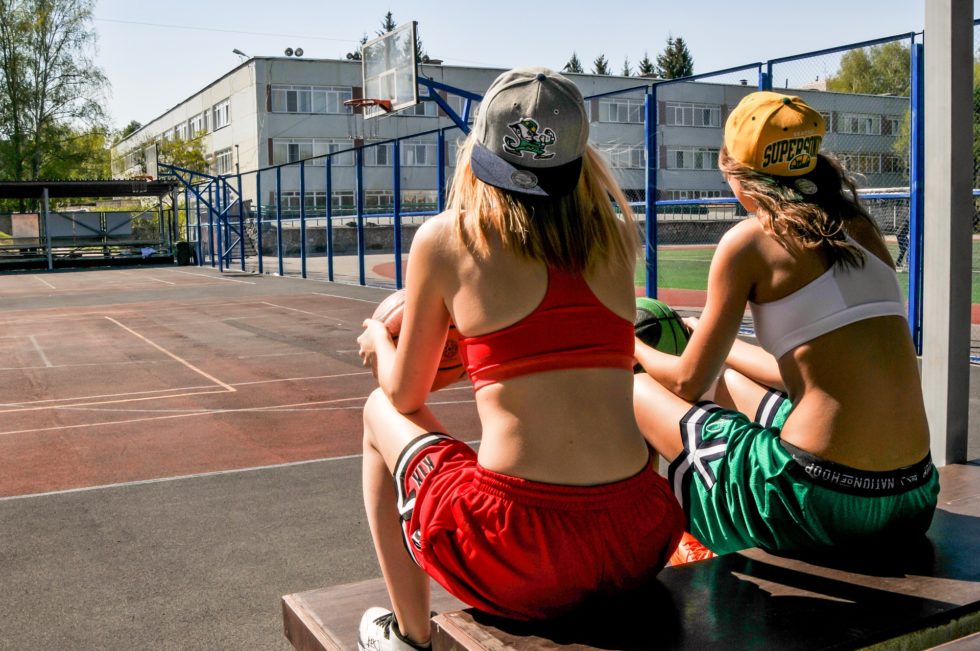 I’m really competitive…Scratch that. I’m overly competitive. My friends don’t even like playing Scrabble with me. I’ve played sports since I could crawl. In fact, when I was a baby, my mom entered me into a crawling race, which I won, because in the middle of the race, I got up and started walking. I ended up getting disqualified for cheating at the mere age of eight months.

When my boyfriend, M.J. (no, not Michael Jordan), suggested we play basketball together, I laughed. Piece of cake, I thought. I imagined myself walking out on the court, dribbling the ball with ease, maneuvering around him, and making each shot with no effort at all. I underestimated the whole scenario though. First of all, I air-balled at least five times before we actually started a real game against each other, and watched in horror as M.J. made every shot.

He looked at me, with a half-smile like, “You didn’t expect me to be good, did ya?”

No, I didn’t. I knew he played sports growing up, but as we started playing our game, he made three-pointers, dribbled quickly in between his legs, and at times I thought he was going to dunk it.

I finally asked, “Did you play basketball in high school or something?”

To which he replied, “Yeah, varsity, and I played in a league in college and when I went to grad school.”

Now I knew why he wanted to play basketball with me. He was showing off, I thought.

Mr. Hot Shot with all the moves. He even started taking it easy on me since it was clear that I had no skills whatsoever. He wouldn’t block me when I tried to shoot or even really tried to get the ball from me.

After each ball bounced off the rim, I got more annoyed and more agitated when he made a shot. I wanted to be happy for him, but I found myself getting upset because I was losing. I hate losing. I especially hated losing to someone that I didn’t expect to be any good.

This is supposed to be fun, right?

We were playing in a public park and a couple of kids were playing on the court next to us, and when I say kids, I mean 5-year-olds. They were better than me and I found no humor in the fact that I sucked.

I had to hide the fact that I was upset. Here I was on a beautiful day in the park, playing basketball with my boyfriend, and all I could focus on was the fact that I kept getting worse and kept falling further behind in points.

It made me wonder; if one is competitive should he or she play sports with their partner? In my experience, yes. Being competitive isn’t a bad thing. In fact, it can be good if the competitiveness isn’t mean-spirited. Of course, I wanted to win, but I started to enjoy watching my boyfriend show me something he is good at doing. We even started to joke during our little match and it got more playful and less serious. It became clear that I wouldn’t win, so why get upset?

I know some couples who just can’t do anything competitive with each other. It brings out the worst in each person and before you know it they’ve broken up over a game of Monopoly.

Competition doesn’t have to be bad, though. In fact, competition in certain ways can be healthy and can bring couples closer together if they compete within the game itself, not against each other. It’s about the game, not about your partner and whether or not he or she is better than you at something. Instead of competing for the glory, compete for something that you both can enjoy with each other at the end of a game. Whether it’s dinner, beer, ice-cream or even the winner having choice of the next flick for movie night, you can both experience pleasure together.

If your competition of choice is sports, you’re also getting the chance to do something healthy with your partner, which is a win-win. It can also enhance your sex life. According to a study at Penn State, researchers found that when women anticipate competition they get a surge of testosterone, which boosts the libido. The same goes for men. Think about that for a moment; both of you win.

Where competition begins to get tricky is when each partner is trying to one-up each other. And, that can carry into other aspects of your relationship, whether it’s who makes more money or who can cook a steak better. Constantly trying to outdo your partner only causes tension and tension is no relationship’s friend.

Fortunately, my boyfriend didn’t make fun of me too much after my display of zero basketball talent. Instead, post-game (I am too ashamed to share the score results), M.J. gave me a shooting lesson. Being open enough to have my boyfriend teach me how to get better at something he just beat me in also brought us closer. There is something extremely sexy about someone who is good at something and as his partner, I want to be supportive of him. We have to accept that each of us have strengths and weaknesses and competition can showcase those traits.

Lucky for me though, I know one competition I won’t lose. When M.J. and I tee it up on the course, he’ll get a taste of what it feels like to get beat by a girl.