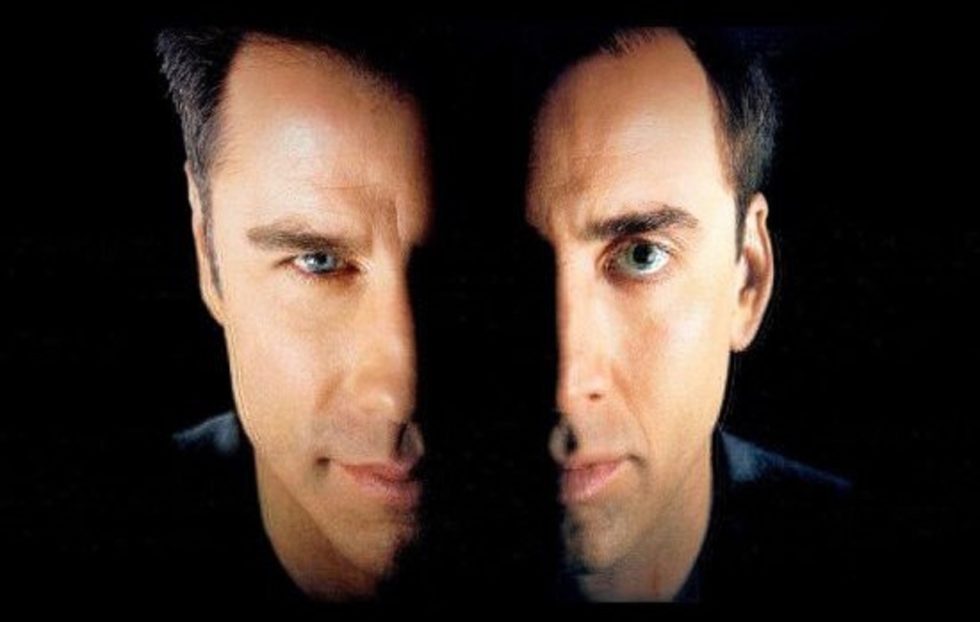 “Ooooooooweeeee! I’m Caster Troy.” Do you know that line? Great, great part from John Woo’s epic action film. I am a big fan of old Johnny-boy-Woo, especially this little number. And who would have thought, hidden within the explosions, the gunfights, the blood and the guts, are bodylanguage principles at work that can help you on the road to mastering attracting women?

If you’ve ever nodded off whilst watching Dave DeAngelo vids, you’ll appreciate the need for something to wake you up, hehe. Don’t get me wrong, I think Dave D is a *genius* and I love his stuff. That said, I know you are hankering for some exciting material to help motivate you to learn all this crazy stuff about how to attract women.

On that note, If you haven’t seen Face/Off, I highly recommend you do so, it is awesome. Totally badass.

So… How Can It Help?

What are the 7 evil genius bodylanguage secrets then? Boom, here they are:

OK first off, remember back when you watched the film. Remember how evil Nicholas Cage looks when he is playing the part of Caster Troy. Picture that evil smile that creeps over his face. Satan himself would be proud of that smile.

On the other side of the coin you have John Travolta playing family man Sean Archer. He has a smile that the Virgin Mary herself would be proud of. Even if you had the sound turned down you would know who was the good guy and who was the bad guy.

Then when they have the operation and swap places both retain the facial expressions of their inner self. So when John Travolta plays Caster Troy his face and smile become evil and Nicholas Cage playing Sean Archer looks like a family guy. The portrayal of this by both the actors is pure genius.

Once they have switched faces, you can tell purely by looking at them. Travolta now looks like the evil one and Cage looks like a real family man.

Now think about the vibes you may be giving off to women without knowing it. You must realise how powerful non verbal communication can be and how it can effect the way you make somebody feel. Especially women who you are cold approaching. They have never met you so you need to come across as friendly and non threatening. If Nicolas Cage used his Caster Troy smile women would probably feel a deep and powerful sense of curiosity and perhaps even arousal, its that powerful.

Yet if he displayed the smile when playing Sean Archer, women would be much more likely to see him as ‘friend’ material.

This demonstrates how important it is to be aware of your facial expressions.

When Caster Troy moves, you can tell he means business. You can just sense he is a powerful and dominant leader.

When Troy boy speak, shit gets done. His voice tone is so commanding. He is versatile, soft when appropriate, loud and aggressive when required.

One thing shines through and that is authority.

The last point I want to make just shows how important physical contact is. When Sean Archer wants to show his wife he loves her, he does not need to say it. He takes his hand and runs it down her face. This proves the power of non physical contact can be. Very powerful stuff.

A good thing to try along these lines is touching the small of a woman’s back when you open, making a women feel much more comfortable in a small period of time.

From watching Caster Troy, do you think he looks like a leader? Totally.

People are hard-wired to pick up on this. Often they don’t even realise that they notice, it just kinda happens subconsciously. This goes for men and women.

Put people together in a group and a leader will emerge, it is just biology.

Work on leadership within yourself, and you can ensure that leader is you.

So put all this together and you get the complete badboy package.

The evil and sexually charged smile, the powerful gestures, the authoritative voice tone, and physical dominance. All of these combine to give you one of the best anti-heroes ever.

If you incorporate these behaviours and traits into your own actions (minus the pure evil aspect), women will be powerfully attracted to you, big time.

Have you ever noticed how the badguys always seem to have the hottest girlfriends? Coincidence? I think not…