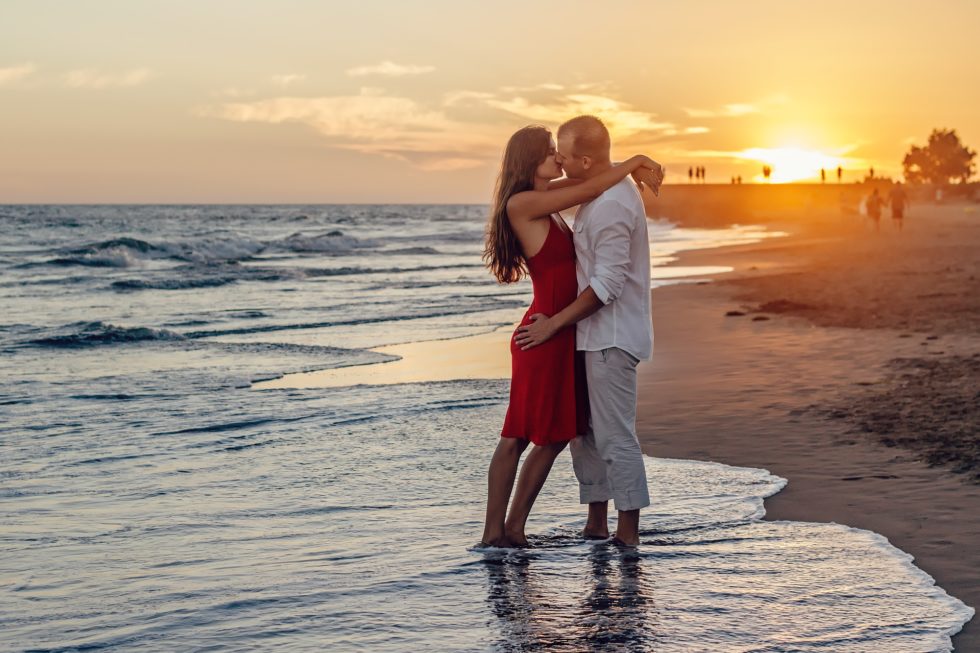 If I had been in a normal mindframe instead of a post-breakup tizzy, I would have politely said, “Thanks for the wine — I should go.” Instead I wondered whether he was wrongly accused.

Breaking up is hard. Breaking up after a seven-year relationship is a hideous vortex of pain and agony that leaves you emotionally unhinged and sobbing in the shower, belting out Tegan and Sara ballads through your tears. Another terrible side effect of ending a longtime love is finding yourself suddenly single after years of coupledom. It leaves you totally clueless and unequipped to re-enter the dating world.

As an example, let’s take a pause and remember Brooks. He’s the old man in “The Shawshank Redemption” who is finally released after years in prison, only to realize that he can’t function outside the pokey. I felt a little like Brooks when I stepped back into the Los Angeles dating scene after my big breakup: Petrified, paranoid, and emotionally untethered. To make matters worse, I was incapable of speaking to a guy at a bar without wanting to burst into tears or throw up or both, simultaneously, all over him. Maybe Brooks didn’t face that last hurdle, but he also didn’t have to deal with dating in L.A. He just had to go to the grocery store and purchase some canned peas, which sounds much more pleasant than putting on a miniskirt and wedges and going out in Hollywood.

Maybe I’m making excuses for my behavior, but I was a little out of sorts when I met Slasher Slasherson. Before you’re all, “Yeah right his name was Slasher Slasherson,” I’ll go ahead and confess that his real name was much more ridiculous and creepy, and I wish I could use it but I can’t for reasons that will become obvious very soon. Slasher and I met at a film premiere. The movie was mediocre at best. Even so, I had just gotten a job at the company that produced it, so it all felt very glamorous. Even though I had nothing to do with the film, if I squinted really hard, I could vaguely imagine that I was a real powerhouse, career-wise.

That fateful night, I shuffled around the room outfitted in a $40 periwinkle blue dress, and casually bumbled past Warren Beatty, each time suppressing the urge to call him “Bud” after his character in my favorite film “Splendor in the Grass.” I had enough sense not to address Mr. Beatty by the wrong name, but I did not have enough sense to steer clear of Slasher.

He was cute, seemingly sane, and wearing a suit. After about an hour of eyeballing each other from across the room, I experienced a post-breakup (or post Pinot Noir) explosion of confidence and told my work friends that I was going to march right over and talk to the handsome dude in the suit. I was a strong, newly single woman and nothing was stopping me. I could do this. And so I did.

He seemed normal enough. He told me his name but I forgot it the second the words left his mouth — not because I was overcome by his beauty and couldn’t focus, but because I am horrible with names. He said he was a graphic designer, which is wonderful in a city full of shiny headshots and unproduced screenplays. Eventually he asked for my number and I returned to my friends feeling like Eva Mendes, Olivia Wilde, and Wonder Woman, all rolled into one. Who cared about my ex-boyfriend or my breakup or all those Tegan and Sara songs?

A few days later Slasher called and we set a date. He asked where I lived and even though I felt like a superstar due to my bold move at the movie premiere, I was actually still a dating dumbo because I gave this strange guy my address and apartment number. This was mistake #1: Do not ever give a complete stranger your address and apartment number before the first date. Obviously I had a lot to relearn.

Slasher picked me up and we went to get a drink. He looked cute even in civilian clothes, and he didn’t have crazy eyes or human heads stashed in his backseat, so everything was going great. On the car ride he told me he was into photography, and that he’d just had a session that day. “I’ll show you my new work,” he said. “It’s on my iPhone.” I prayed that his photography was good if not great. When someone you’re into turns out to be a bad actor or artist or singer it has a way of throwing a wrench in the libido. He also informed me that he had an acting class the next night, and that what he really wanted to do was act. My heart — or libido -– sank a tiny bit. At least he had a day job.

At the bar, we settled in with our wine and Slasher whipped out his phone to show me his photography. I braced myself. “Check it out,” he said as he moved closer. He then proceeded to scroll through about 50 shots of models in skimpy lingerie. This was not some Mapplethorpe-esque sexy genius art going on. His photos were just plain cheesy. And creepy. And since when is it OK to show a girl sleazy photos you’ve snapped of half-naked chicks on a very first date?
I humored him as he scrolled, telling myself that maybe his acting was better than his photography. Mercifully he came to the last photo. Maybe you want someone to show you their lame soft-core pics on a first date, but this should have been a huge red flag for me.

The next red flag came when I brought up his name. “That’s an unusual name, Slasher Slasherson,” I said as pleasantly as I could. “Well my real name is embarrassing,” he replied. More embarrassing than Slasher Slasherson? I flirtatiously pressed Slasher about his mysterious moniker until he finally said, “OK, my real name is… Tom.” I wasn’t sure how to respond. He seemed utterly serious so I decided to just keep the conversation rolling. I think I was still stuck in the Denial phase.

We left tricky topics like photography and sobriquets in the dust and talked about where we went to college. I told him my story (English major, beer bongs, graduation, the end), and then it was Slasher’s turn. Never the dull one, he said, “Well, I went to Arizona State but I got kicked out.” The red flags that had been waving in my face were quickly replaced by a giant blinking neon sign, but since I was a clueless, discombobulated dating dolt and not Wonder Woman, I sat tight and decided to find out more. At this point I was more curious than anything, so I nonchalantly asked the obvious next question, “What’d you do to get kicked out?”

“It’s a story for another time,” he said cryptically. That did it. The photos, the name, the mystery — I was going to get the story out of this dude if it was the last thing I did, which hopefully it wasn’t.

“Oh, it’s OK, you can tell me,” I cooed as if I were Scarlet O’Hara asking a gentleman caller why he brought her petunias instead of roses. Eventually the Southern charm worked.

“Well…” Slasher started. My heart was beating in anticipation. Maybe he led a protest against the Greek system that got out of hand, or what if he was a whistleblower and he tried to out some sort of corruption in the Dean’s office?

What happened next is not something I’m proud of. Slasher drove me home (Mistake #560) and as I turned to thank him for the wine (Mistake #561), he leaned over and kissed me. Unfortunately, sadly, scarily — I kissed him back. It wasn’t the most horrible kiss I’d ever experienced, but it wasn’t fireworks and opera music either, for obvious reasons. It’s not like I had a burning desire to lock lips with Slasher Slasherson –- I think at that point I was just afraid of pissing him off. Kissing him back and then bolting seemed like the safe and smart thing to do, which is twisted logic, I know. Like I said, I’m not proud, but there it is.

When I got into my apartment, locked all the locks and put the chain on, I felt utterly confused. Did I just kiss a possible sex offender named Slasher Slasherson? Yes, yes I did. I know I had no concrete proof that he was a sex offender (I Googled every version of his name and combination of his careers and crimes at least 15 times and nothing ever came up), but when a guy gets accused of “something involving a woman,” you don’t need a document. You need your instinct, your intelligence, and your common goddamn sense. Those things are sometimes on the fritz after a life-changing breakup.

A few days later Slasher called, and guess what? I answered. Maybe my bruised and stupid ego was flattered -– he was a creep, but at least he called! Or maybe I was just curious to see what kind of insane things he would confess to. I like to think it was the latter.

He sounded drunk and he rattled on about how great his acting class was. He also told me he was going to Arizona for a few days and that he’d call when he got back. A few weeks passed and he didn’t call, so I didn’t have to go through the test of seeing whether I was crazy enough to actually go out with this guy again. I’d like to think I would have had some sense, but the other funny thing that breakups can do is crush your confidence, maximize your insecurity, and make you blind to the fact that there are great people out there, people who don’t get kicked out of college or take corny pictures of models in lingerie and then show them off to people on a first date — people you deserve to meet.

Several months later, when I was finally free of the Brooksian blues and able to function as a fairly sane woman in the dating world, my phone rang during lunch break. Whose name do you think popped up on caller ID? I’m happy to report that I did not answer Slasher’s call, and I didn’t even have to go through some epic struggle of mentally coaxing my fingers away from the answer button. I did listen to the message though.

“I just wanted to tell you that I’m sorry I didn’t call after I went to Arizona. You were great, but I went home and met the love of my life and now we’re engaged. So I just wanted you to know that. OK. Bye.”

I guess at least if you’re going to kiss a sketchy possible criminal, you should kiss a sketchy possible criminal with some manners, right? Wrong. What I took from this, my most embarrassing dating experience (usually when I get to the end-of-the-date story and someone asks, “You didn’t kiss him, did you?” I answer, “No, of course not!”), is that even though you’re brokenhearted, discombobulated, and clueless, you need to pay attention to red flags, stop telling total strangers your address, and realize that just because someone isn’t storing severed heads in their car does not mean that they’ll do. We can all aim higher than that, even in a city like Los Angeles.