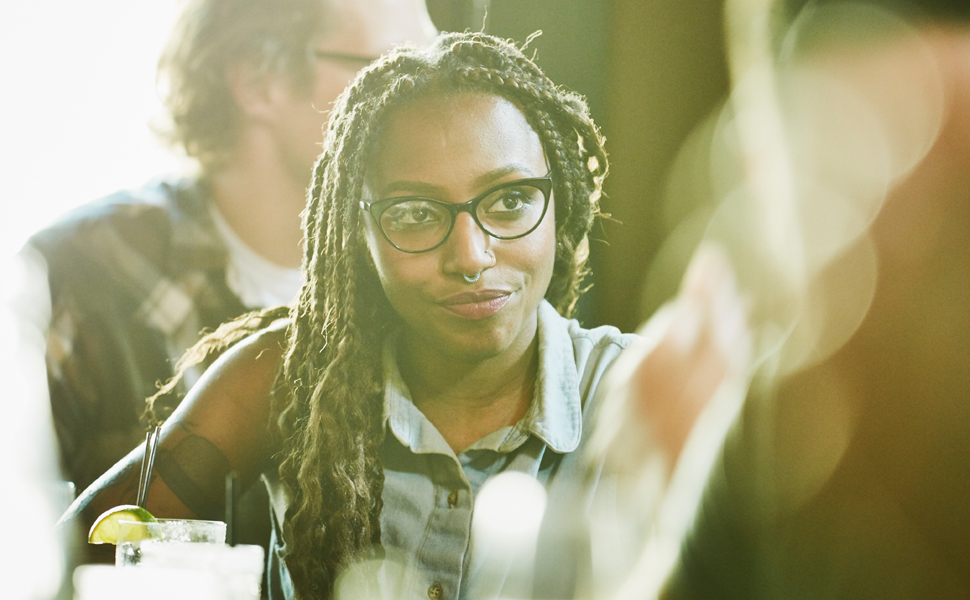 Your palms are sweaty, knees weak, arms are heavy. There’s vomit on your sweater already, mom’s spaghetti. (Umm, why is Mom still cooking your dinner?)

You’re a grown man, nervous but on the surface you look calm, ready to drop bombs. But you keep on forgetting what you wrote down. So we wrote it down one more time for you, because approaching a woman in a gulf of gawkers and other fine prospects can be intimidating. Especially if she’s totally aloof to your creeper stare, or a newfound Belieber dancing in a ring of forbidden trespassing. And especially if there’s spaghetti sauce on your graphic tee.

Here’s how to steal her attention if you get just one shot, one opportunity…

Feel it out and choose a song that’ll get her on the dance floor, but here’s the pitfall: The potential to screw yourself over is tremendous.

Keep your shoe game strong and remember: Jeans speak volumes and could either make a man or break him. You might get her attention with your gold-stitched seams or chlorine-dipped floods, but not for the right reasons. Regardless of the bar’s dress code, maintain your own standards—what you put on is a manifestation of your dignity. In a sea of handsome faces, dress can set you apart before you even make contact. We’re not saying it’s cool to judge a book by its cover; we’re just saying that fashion functions a lot like sign language, in that it’s nothing but wordless communication. And whether it’s a Panthers jersey in New York, ballsy but justified, or a shell-neck sweater, you just told her a whole lot.

Man the jukebox, and the dance floor.

If there’s a jukebox, master the playlist. The advice to follow is universal. When a group of women head out unaccompanied by the male species, at least one of them stated at some point while ransacking her roommate’s closet, “I’m tryna dance tonight.” And what she really means is, she wants to belt Adele lyrics. So choose wisely, gentlemen. Feel it out and choose a song that’ll get her on the dance floor, but here’s the pitfall: The potential to screw yourself over is tremendous. Avoid recent hits that make every female freak out, because once that friends circle forms, it’s nearly impossible to penetrate the pact. If you dare try, her friend will spin her away from you; try again and she’ll disappear to the bathroom. Thrice and she’ll tell you she’s a lesbian. You have to play some song she’ll surely sing to but eventually say to her friends, “Alright, I’m over this.” That’s when you swoop in and revive her tapping toes. Come on Eileen!

Buddy up with the bartender.

Once you’ve soft-shoed, it’s time to step away. You’ve got a new person to schmooze: the bartender. Befriend him or her. How? You’re a witty smooth talker. You’re respectful. You pay in cash and you tip damn well. Your dance partner will come looking for you, and when she spots you pal-ing it up, you become a winner. She’s thirsty from that dance floor workout, and you’ve got the cool, refreshing solution. This is your cue to offer her a drink or send one over. Tito’s and club is a fine choice—rated one of the best-tasting vodkas, everyone likes club soda… and it’s gluten-free in case she’s one of those.

She thinks your running man is a charming blend of funny and pathetically endearing, you’ve quenched her thirst and now it’s time to get to know her. Don’t even attempt a pick-up line; simply introduce yourself. Don’t do all the speaking; ask her about herself. People like talking about themselves. It’s just a thing. And those who ask questions always come off as valued conversation partners. Just make sure you don’t start off with, “What do you do?” and don’t start off with a physical compliment. It’s lame, potentially boring and there will be plenty of time for that stuff later. Instead, compliment her dance moves or ask what else she does well. That could get interesting.

It’s key. We once told you that eyes are windows to the soul, and science backs us up. Those who make direct eye contact are perceived as far more attractive than those who avert eye contact, perhaps because it fosters trust and empathy. She’ll feel comfortable talking with you, which will  sustain your conversation—almost certainly long enough to exchange numbers… and maybe even long enough to make breakfast. So we’ll let you take it from here. Just remember: You can do anything you set your mind to, man.