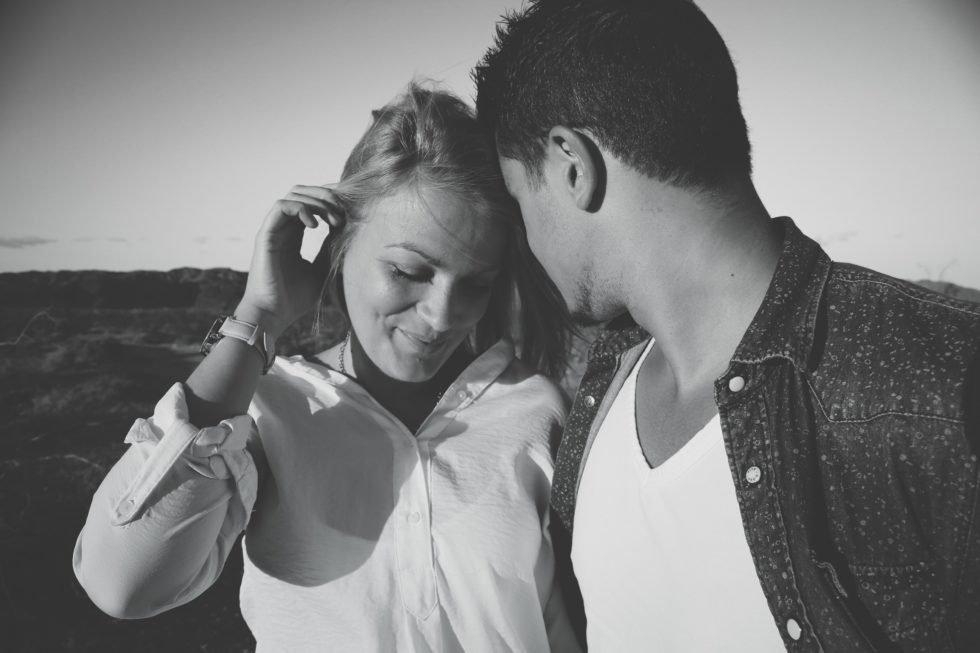 Somebody asked me recently if I thought men were better flirters than women and I laughed in their face. Hell no! Women are by far the superior flirters while men bumble and stutter their way around flirting. Women are brought up to use their looks, their sexuality, and their ‘meakness’ to entice men. We are born flirters.

At times it is hard to not laugh or cringe at the flirting attempts of men. It’s not their fault, they were never taught the art of subtlety the way women are.  Even a man who is a born charmer or flatterer doesn’t necessarily equate to a good flirter. Let’s break it down by gender, shall we?

From across a room or a crowded bar, a lot can be done to flirt and make your interest known prior to a face-to-face conversation. Men typically blow at this type of flirting. Their method of seduction varies from nudging their friend and pointing your way (followed by a high five) or arranging themselves in the group circle so they are facing you. My all time favorite was the guy who did the 2 fingers to his eyes and then to me in the “I’m watching you” sign. I had the bouncer walk me to the car that night.

We are all about body language and eye contact when it comes to long distance flirting. Just like the guys, we’ll try to angle ourselves, or at least our torso, towards the guy we are attracted to. Glances and smiles are our go to. Glance his way; establish eye contact, smile, and look away. Rinse and repeat. Stealing looks and gifting smiles while we sip on our straw or drink our beer is meant to peak the male curiosity. If we’re brazen we may do a small finger wave and we’ll probably look for a way to move ourselves closer to him without coming right up to him (ordering a drink at the bar closest to him or dancing our way over to his side of the room). We’ll make our interest known but we’re not going to call overt attention to it.

This is where men really fail! Just like sex, women need a little foreplay before you dive right in if you want a warm welcome. Men who think that approaching you, penis first, on the dance floor and grinding against you is a good introduction are incredibly delusional. Also, walking up to a woman with no prior eye contact or across the room flirting and cutting in to a conversation to say “You’re fine and I wanna make you mine” won’t work either.

On the other end of the spectrum we have corny pick up lines, which don’t work unless they intentionally go really cheesy and try for the humor factor. Honestly, I’m not sure what ever happened to, “Hi, I’m James, and I just really had to come over and talk to you”? It works!

Women still like to be pursued so while we may occasionally take the lead on the approach, chances are that we’ll do our “from afar” flirting and work our way closer to you so we can lob the ball into the guy’s court.

This doesn’t mean that we won’t send a drink a guys way and follow it up with a stroll over to introduce ourselves or just save the money and walk right up to say hello, we will, but it’s probably a bit more rare. We’re more likely to accidently bump into a guy, order a drink at the bar closest to him, or subtly work our way into a conversation.

This is where men become a bit “greedy” in their flirting. There are a lot of times I’ve seen men approach a group of women and throw out the net to see which female he catches, not caring whom he really lands. Guys will go for the broad spectrum flirting, the friendly guy that just wants to chat, and then see which lady is most receptive.  We’re on to you, gentlemen. Instead of singling out the woman he’s truly interested in and potentially missing out on a connection he’ll just toss out the bait and see who bites.

Women are goal oriented and intent on their prey. They have a target and there will be no deviating from that mission. We know whom we want and we’re going to go after him. Until that mission fails and we launch another one, that man is our objective. There is no “net” thrown out. There may be casual flirting with his group of guy friends he’s with but it’s him we’re standing next to, smiling at, and touching arms with. If we fail, we fail, but our eye is on the prize.

All that talk about how we flirt doesn’t even begin to touch on why we flirt! Men and women flirt for totally different reasons. Ladies, hate me for saying it if you want but half the time we flirt just for the attention it gets us. Men, you flirt because you want to get laid. Cut the crap and admit it.

Plus, there’s a total double standard in flirting. What is considered “cute” for women is considered restraining order creepy in men. Not many men complain about a woman coming up to them and grinding on their laps but a guy does it and suddenly she’s giving her friends “the look” until they save her. Women can approach a group of guys and look badass as hell but a guy who approaches a group of women is typically regarded with caution. It’s not fair and it sucks for the guys out there but ladies; we rule the flirting roost.

You can get as angry as you want but we all know it’s true. Women are natural flirters and even the most charming of men can’t stand their own against a tried and true flirtatious female.

Now that I’ve said my piece on men v women and flirting I want to hear what you have to say. What’s your favorite flirting technique and do you agree that women are better flirters than men?