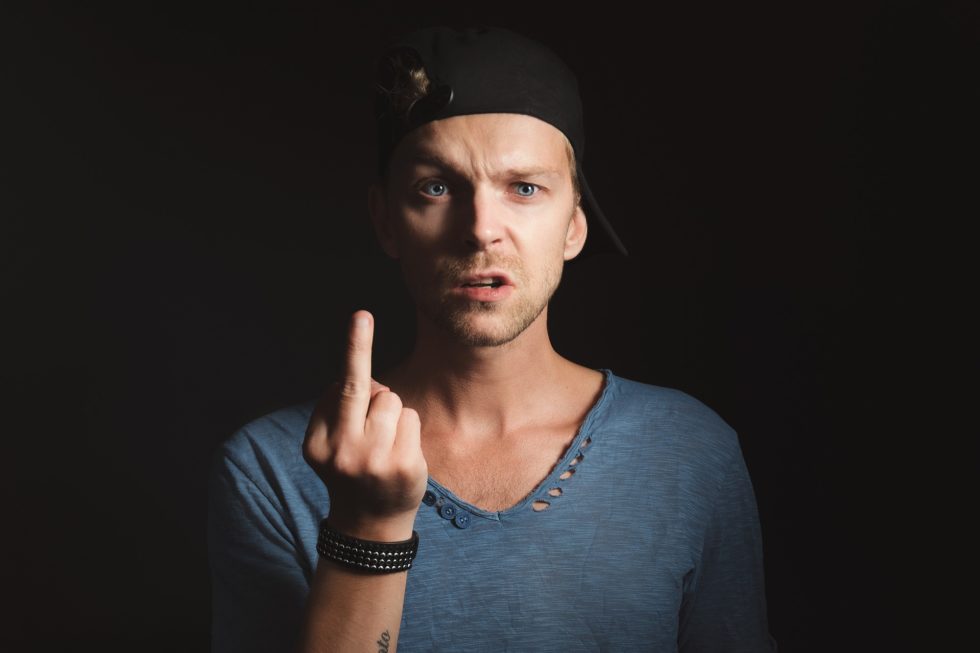 You’ve met The Douchebag before.

He’s the guy who tries to tool you in front of a hot girl. The guy who picks fights at clubs for no good reason. The pompous, arrogant asshole you hate and want to choke on sight.

Unfortunately, beating up every jerk on earth would take forever. Besides, it’s natural for men to test each other! Fighting every dude who challenges you – douchebag or not – would quickly turn into a full-time occupation.

The smart thing to do is deal with male aggression verbally. Play your cards right and you can get rid of any jerk you meet without lifting a finger! Just follow these simple instructions.

Method #1 – Establish Dominance by Ignoring Him

Imagine you’re out with a group of coworkers and one guy’s trying to make you look bad. He’s cracking joke after joke at your expense – and you can’t think of a way to diffuse the situation. Confront him and he’ll say he was messing around; let him go on and get tooled.

Surprisingly enough, the best – and most effective – thing to do is simple: ignore The Douchebag. Let him try and mess with you; meanwhile, just carry on with whatever you were doing. This works because:

1. Ignoring him establishes you as non-reactive: a powerful and attractive male trait. By refusing to let the jerk bait you, you demonstrate your higher social position. You wouldn’t care if a 5-year old insulted you, so why let someone equally intelligent bother you?

2. When a Douchebag sees you not reacting, he’ll start trying harder and harder to get a reaction out of you… Making himself look like a desperate, bitter try-hard in the process. He makes himself look weak; you look calm and strong to anyone watching; girls start throwing panties in the air. Win.

3. If a guy’s aggressive but not a real douchebag, he’ll see that picking on you’s no fun and let up. Often, men like these will respect you for handling the situation and start acting friendly.

Method #2 – Turn The Jokes Around with Humour

The simplest way to turn a joke around is by agreeing with it – and exaggerating humorously. For a great example, check out this Arnold Schwarzenegger interview snippet. When asked about homosexuality in bodybuilding, Arnie asks for a kiss: immediately, the audience cracks up and the tension is gone.

This works for two reasons. First of all, agreeing with a joke instantly breaks the pressure that Douchebags try to lay on you. By saying “Yes,” you’re changing the flow of the conversation and putting yourself in control.

Second, exaggerating is another display of dominance through non-reaction. You’re not addressing the insult – you’re just having fun and sidestepping it. Classy.

Method #3 – Make Him Seek Your Approval

Making jerks seek your approval is a great way to dominate them in social situations. It doesn’t matter if they’re really trying to impress you – if that’s what it looks like to everyone else, you win. And this method is very stealthy, so it’s great for dealing with cockblocks and people you want to neutralize “under the radar.”

All you need to do is ask a few questions – and then dismiss the target. Here’s an example:

You: So where did you say you work?

See? All you did was ask a few questions, and now – as far as anyone watching’s concerned – the jerk’s trying to impress you. And since thoughts follow actions, he’ll start qualifying himself to you in earnest. Once that’s done, dismiss him with a compliment to show you’ve been “sufficiently impressed” – and cement your strong social position.

I hate making things complicated – the 3 jerk-destroyers in this post are simple, powerful and versatile. I use #2 all the time – with guys and girls (more on that in an upcoming post). All I ask is that you use this knowledge carefully; don’t be a douchebag. Whatever you do, keep things playful and never pick on people weaker than yourself – karma’s a bitch.