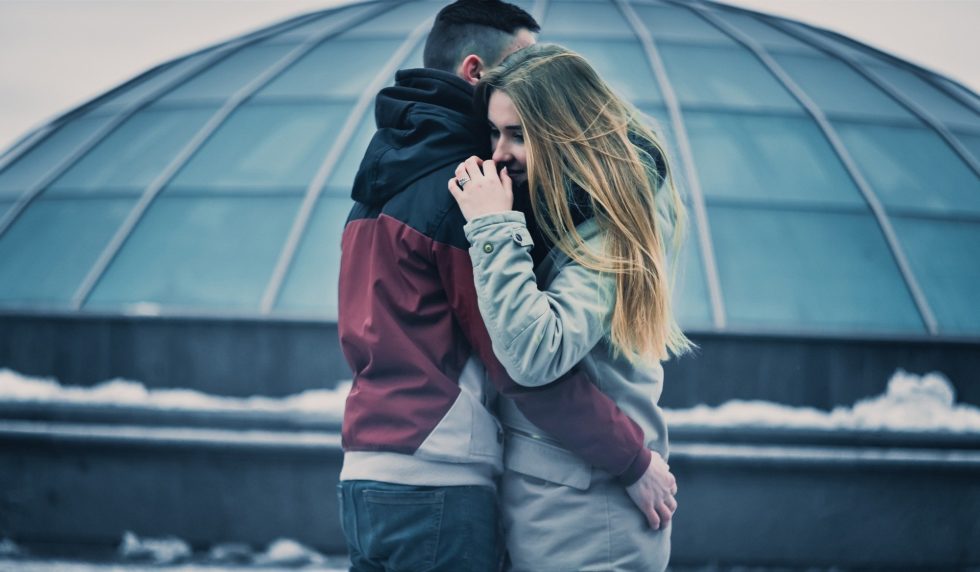 By facing this sticky emotional stuff head on, and having an ongoing conversation about it, I’ve gone from feeling tense around these women to being able to count them among my friends.

When I first met Kevin, my boyfriend of a little over two years, we had one of those great first dates where there were no uncomfortable silences, no awkward small talk, and no scary red flags. When he walked me to my front door, we were practically yelling things at each other because we each felt like there was so much left to say. That’s pretty much continued ever since; our ability to talk about anything and everything has made this by far the healthiest and happiest relationship I’ve ever been in.

One thing that probably took a few dates to talk through, however, was the fact that we were, at the time, both friends with our exes. My friendship with my ex has since petered out, but my boyfriend is still very close to a girl with whom he was once in a long term relationship. And this might sound shocking, but I actually feel fan-freakin’-tastic about their friendship.
Okay, I admit that when I first found out, I may have had some misgivings. I may have even questioned a mutual friend or two about her. I was a little alarmed when someone pointed out that we look a bit alike, and, as someone who is naturally prone to the occasional pang of jealousy, I sometimes felt insecure in her presence because she did seem a bit like a cooler, younger, more-together version of me. I would compare myself to her and wonder if their friendship could be truly platonic, or if he had chosen me just to replace her. Over time, however, I noticed something — just a silly little thing really, but it felt like a huge revelation for me: Kevin never referred to this fabulous woman as his ex, but always just as his friend. They were past the stage of being exes, and had been for some time before I arrived on the scene. Sure, she and I had things in common — they were some of the same things he and I had in common, and these common interests and qualities were the fabric of their friendship and our relationship. The things which made us different — like our five-year age difference — were what made Kevin and I a better match.
These days I am not only comfortable with their friendship, but actively grateful for their romantic history. She is at least partially responsible for shaping some of the aspects of his personality that drew me to him in the first place — for example, he is an enthusiastic supporter of the feminist movement because she is a feminist and she helped introduce him to these ideas
My boyfriend is not prone to jealousy like I am, which is great considering I am bisexual and have friends of many genders and sexual orientations, in combinations which a more jealous person might find (and which some exes have found) intimidating or cause for concern. One of my oldest and closest friends is a straight guy, and I have heard from my past significant others that our friendship has caused them some jealousy.
I mean, listen — I do get it, obviously. We don’t have an exceptionally physically affectionate relationship, nor are we, as far as I can tell, flirtatious or otherwise sexually suggestive towards/with each other. However, as we have been friends since we were teenagers, we have developed a comfortable shorthand and a slew of wacky “remember that time” stories that could certainly make a boyfriend or girlfriend feel a little left out.
But this doesn’t mean those friendships have to end. Rather, it means there have to be conversations about boundaries, and, in my experience, the development of new friendships between the friends and the significant others. I go for ladies’ night drinks with my straight male friend’s girlfriend. I chat about Margaret Atwood with my boyfriend’s best girlfriend. My boyfriend plays poker with my best guy friend. There are double and triple dates, and group nights out, and orgies.
…Okay, maybe not that last part.
The primary friendships are still between me and my best friend, Kevin and his best friend, and so on, but now there are strings tying each of us to these other important people in each other’s lives. It’s a lovely thing.
I happen to think that there’s something else a bit nefarious at play in this whole “don’t trust a guy who is best friends with a girl” thing. Women are socialized to view each other as competition- we compare our physical attributes, our careers, our status in life, the success of our various relationships, and so on. Men compare themselves to other men as well, of course, but there’s no stereotype about men being “catty” to one another or that men will, as comedian John Mulaney put it, “just say weird, passive aggressive things” to each other.
We’ve internalized the sexism that says we must do that “I’m not like other girls” comparative technique to prove that we’re cool girlfriends, real women, etc. and it can so easily turn into this vicious cycle when you run into the boyfriend-with-a-female-best-friend situation: If you try to keep your worries to yourself for fear of seeming crazy, insecure or needy, then you’ll almost certainly wind up accidentally acting out in a passive aggressive way that actually makes you seem like one of those crazy girls guys love telling stories about. (Disclaimer: The guys who talk about girls that way are generally jerks, so, you know, if you have found yourself the unfair victim of a bit of “crazy ex-girlfriend” slander, just be grateful you’re no longer dating the creep.)
Fighting against the impulse to pit yourself against all other women in general — but especially those with whom your significant other is friends — can be a truly freeing experience. When I was writing this piece, for instance, I contacted the girlfriend of my best male friend and my boyfriend’s bff/ex to make sure they would be comfortable with me discussing this topic (considering they are described here if not directly named), and after about two minutes of discussion it turned into a big love fest wherein we all expressed how great our friendships are and how much we each admire each other.
By facing this sticky emotional stuff head on, and having an ongoing conversation about it, I’ve gone from feeling tense around these women to being able to count them among my friends.
I don’t think I’m being naïve or that I am only comfortable in my current situation because I’m naturally such a trusting person. In fact, my very first relationship involved my girlfriend cheating on me with one of her close friends from work.  I think I have more reason than most to be suspicious of friendships between any combination of gender and sexual orientation that can see two people attracted to one another.
And yet, all my bad experience taught me was to trust my instincts. If something feels wrong, it probably is. That doesn’t mean any situation involving two people of a hypothetically-possible-attraction will actually result in an attraction, or the cheating that often follows. Dismissing all friendships that don’t fit into the category of “two straight people of the same gender” as impossible because of one bad experience is a mistake, and it involves a clichéd, damaging assumption that I, for one, am super tired of hearing.
Can men and women be friends? Yes. And forgive me for my flippant attitude, but: duh.