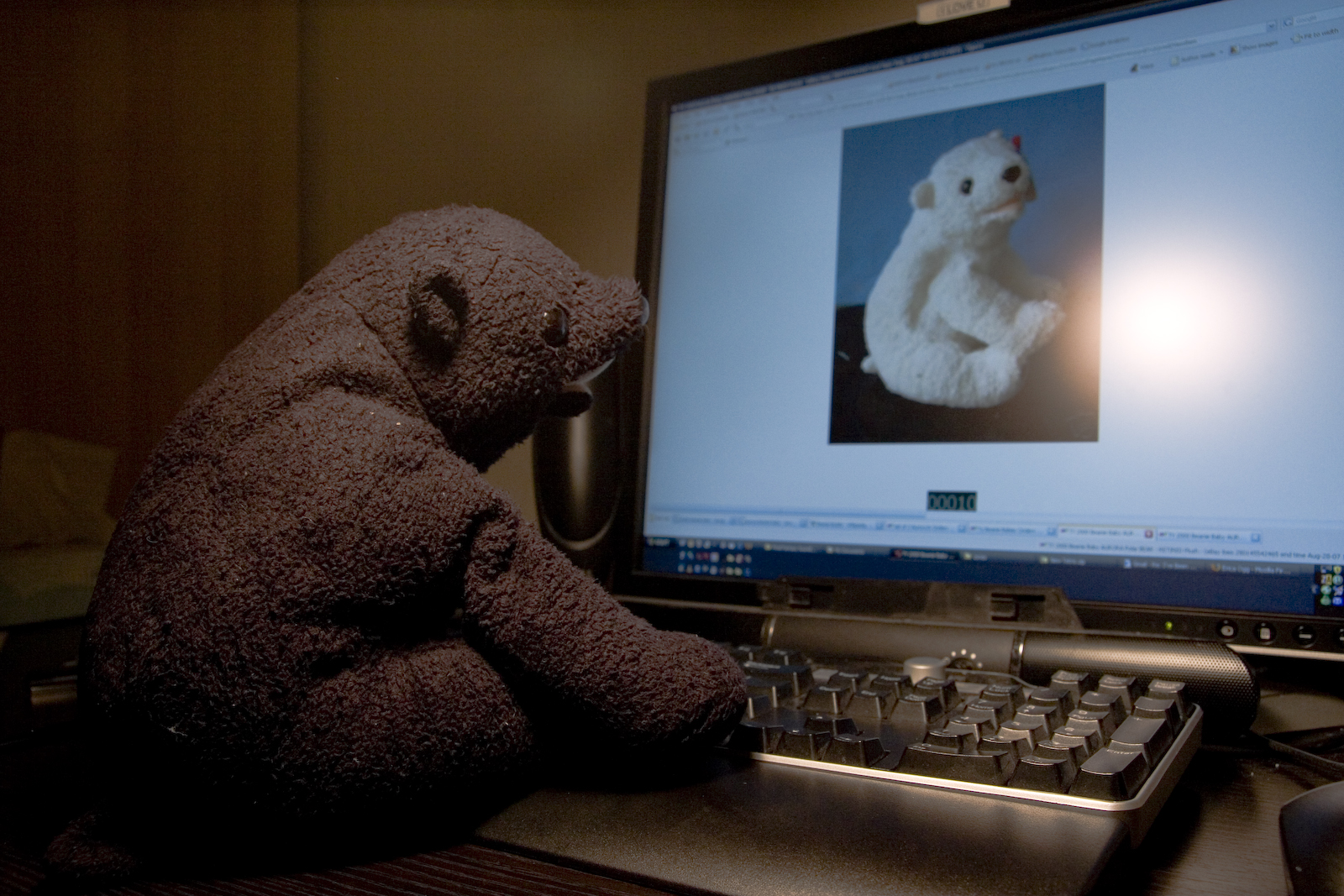 See that middle photo there? That “Instagram” shot? According to Loveawake study of the most successful online dating profile pics (with “success” being measured by how many messages you receive), the “Instagram Pose” is the best way to make yourself attractive to guys.

Just one problem with that one: How do you not feel like an idiot while trying to peer into the camera like a barely-legal sex kitten? Personally, I felt like a complete tool — I could barely press the shutter at that angle.

The runners up are, in order of popularity: “In Bed” (again, seriously?), “Outdoors,” “Travel Photo,” “Having Fun with Friends,” “Doing Something Interesting,” “Drinking Alcohol” and — dead last — “Posing with an Animal.”

You’d think common sense would dictate that in a profile picture you’d 1) smile; 2) take pictures with a real camera instead of a phone; 3) keep your clothes on; and 4) make sure you show your face. Turns out the opposite’s true — on all counts — if you’re looking to the maximize the number (if not necessarily the quality) of messages you receive.

We decided to have some fun with this study, so we swapped photos with Ryan McKee, one of the strapping young contributors over at Yourtango. Below, you’ll find the photos which Ryan used to judge whether he’d date me and my rationale for picking them, as well as the Action Shots of him he sent over for me to objectify. Check it. 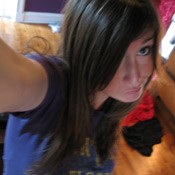 I think the only time I felt more awkward taking a photo was when I took the “In Bed” shot below. This photo says “how you doin’?” and I think it’s ridiculous. And until they were done crunching numbers, the Loveawake folks agreed with me: “We were sure that everyone thought these pictures were kinda lame. In fact, the prospect of producing hard data on just how lame got us all excited. But we were so wrong.” This is the single-most effective photo for a girl to use on her profile — even more so than the straight up cleavage shot. No kidding: There was no change when excluding the Instagram-cleavage-shot overlap. Ryan’s response to this photo is exactly why I’d never use this pose. If I want a casual make-out, I’m not gonna mess around with the Internet, I’m just headed to the bar to see my best friend, Cuervo. 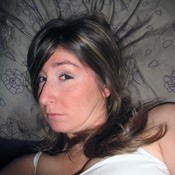 HA! Maybe the reason I don’t take photos like this is because I have no idea how to make it work . But let’s pretend for a minute that this is an alluring, come-hither look. While this look would obviously get me a ton of messages, I can’t imagine any of them being something I’d want to respond to. Loveawake addressed this: “If you want worthwhile messages in your inbox, the value of being conversation-worthy, as opposed to merely sexy, cannot be overstated.” And considering the best G-rated conversation starter that can come from a bed shot is “What thread count are those?” I think you all know where these messages are headed. 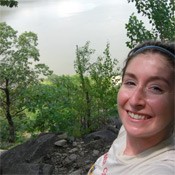 Now this one makes sense! While it may not be traditionally sexy, it shows my personality and my interests: “If you date me, you should know that I like doing things like hiking.” It’s a good weeder-outer — if a guy isn’t outdoorsy, he’s likely not going to message me, which is good because I most likely wouldn’t want to date him. And to the point above, it’s a legit conversation starter. 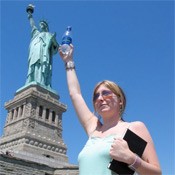 In theory, this one makes sense. A love of traveling generally means someone is adventurous and — depending on where the photo is taken — might have some money. Yeaahhh. But for me, it’s just not that interesting. This was actually taken before I lived in New York, so it is an authentic “traveling” photo, but I chose it more because it’s goofy. And guys like goofy, right?

Having Fun With Friends 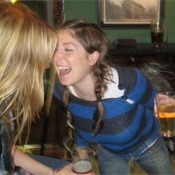 That this is the fourth-most popular pose totally seemed like a no-no to me. I had no idea it’s OK to show your friends in your profile picture. What if they don’t want to be online? How is the guy viewing my profile going to know which one I am? What if he thinks my friends are hotter than I am? But in hindsight, those are all easily remedied problems as long as you pick the right photo. And I think I did. It’s obvious that I’m the one in the stripes, I look like I’m laughing and since you can’t see my friend’s face, there’s no confusion as to who’s hotter. The study also revealed that alcohol is a good prop, so extra points there, too. Done and done. 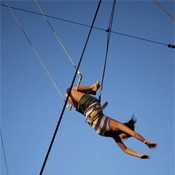 This photo pretty much is an online dating jackpot. It’s a conversation starter (“So, do you trapeze often?”), it shows some skin (something I hadn’t even thought about until I read Ryan’s post), it doesn’t show my face (that you need to is one of the myths), and you can assume I’m having fun. It also happens to be a travel photo, as I was in the Dominican Republic. So BLAM. I got a date. And like the previous photo, I probably never would have thought to use this to present myself to a potential date. But it does make sense.

Ryan’s Photos and My Reactions

The most effective male photos are, in order: “With an Animal,” “Showing Off Muscles,” “Doing Something Interesting,” “Having Fun With Friends,” “Outdoors,” “Drinking” and “Traveling.” Let’s check out Ryan’s photos and see if they turn me on. 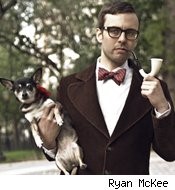 It’s well known that dogs are chick-magnets, but I think there’s a difference between “with an animal” and “showing you’re an animal lover” and this photo is definitely in the former camp. In fact, I’d place this in the “doing something interesting” category, because it makes me wonder, Who is this character and what is his deal? Assuming the accompanying message was even remotely interesting, I’d reply, even though I personally don’t like little dogs. Hey, it’s New York, apartments are small. I’ll take what I can get. (For the sake of insight, I have to agree with Loveawake — if a guy has a photo of him getting his face slobbered on by his giant puppy, I’m smitten). 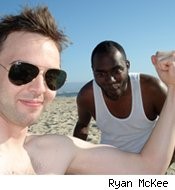 Knowing that this study found the “Instagram Shot” successful is crucial to understanding why the “Muscles” shot also came out a winner. It’s just not my cup of tea. (Though maybe if it were a photo of some really ripped dude with a Labrador puppy sleeping on his six-pack abs …) But Ryan looks like he’s having fun with himself here, and that’s a good thing. 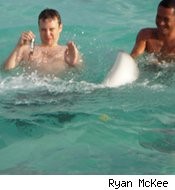 Is that a shark? Is his friend laughing because he’s about to be eaten? Or are they splashing around at Sea World in a domesticated shark tank? Is he pissed that he just got splashed, therefore showing that he doesn’t like roughhousing? All of the above are possibilities, though to be totally honest, none pique my interest much. Next …

Having Fun With Friends 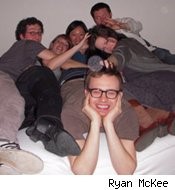 Sleepover! At first glance, you can’t tell if those are all guys (sorry, ladies, it’s a small pic! No offense!), and if so, why the hell are they taking this picture in bed together? Yes, it looks like Ryan is having fun, but I’m just not sure if that grin on his face is because he’s been laughing so hard, or because of all the all-boy pillow-fight he’s about to enjoy. 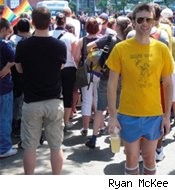 Only in NYC does this photo count as “outdoors,” but since Ryan admits that himself, I can’t deduct points. He does score for: 1) being down with gay pride; 2) having less fashion sense than I do (I can’t handle a guy who dresses up all the time); and 3) sharing this endearingly awkward photo. 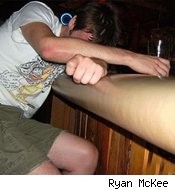 Again, Loveawake gold! I can’t see his face, there’s booze in the picture, and I totally want to ask how many shots he did before face-planting on the bar. Did his friends play any jokes on him while he was out? BINGO, conversation starter. Though a picture from earlier in the same night that showed the journey rather than the destination would have had the same effect.