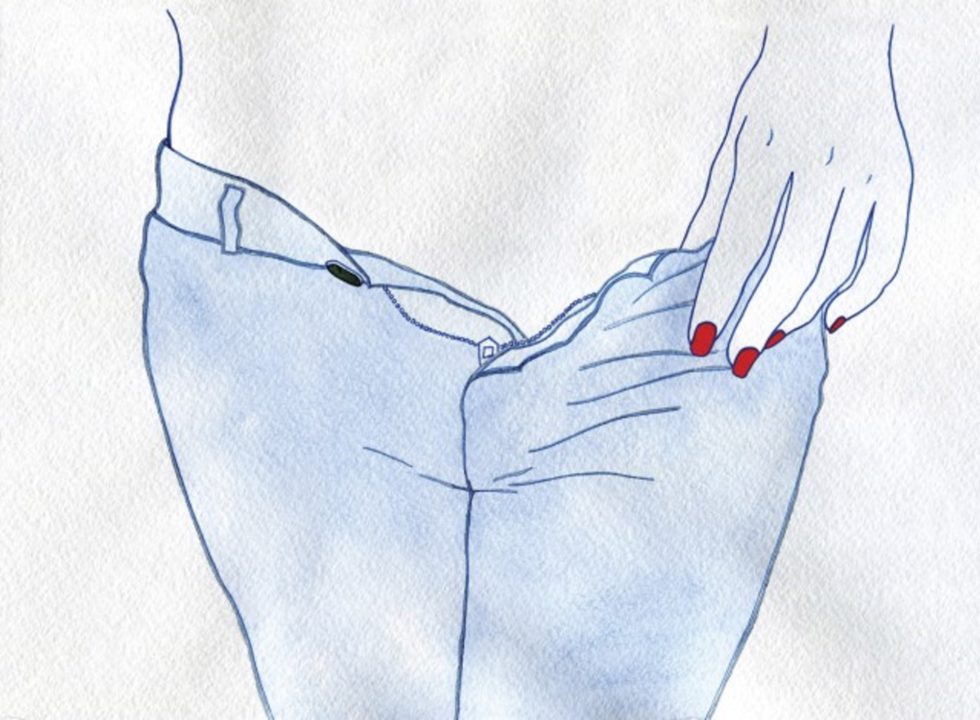 It was a crisp fall evening in Los Angeles. I was meeting a friend for drinks after work at a local east side burlesque bar. I walked in and noticed him immediately, the cute hipster bartender, his curly mohawk bouncing around behind the bar. I ordered a Bullet on the rocks, and unfolded a twenty. He said it was on the house. Gotta love a bargain. I tipped him in a smile and he says he’s getting off soon. I said, cool as a cucumber in jug of spa water, “I’ll be around.”

He found me after his shift, holding two free beers. I didn’t know at the time what would happen, but my vagina did; it was as if her spirit crawled out of my torso, ascended towards the sky and whispered into my ear “This is going to happen, follow my lead.” I asked him the three most important questions:

1. Name:“Jaime.” Cute.
2. Dream Job:“Musician but I really like comics.” We can work with that.
3. Do you have a good relationship with your Mother: “Yes, she’s my best friend.” Red flag, but who cares.

Powered by liquid courage, I put my hand on his shoulder and said with a slight booze affect “We should stop talking, I’m going to pee, and then we’re going to make out.” He agreed to the plan and we found a vinyl chair to make out on. A few minutes later the manager shuffled us off of the chair, “This is for the dancers!” We collected our lust and moved outside through the back door into the trash area. Nothing gets me hotter than garbage, and we continued to make out up against a metal shelf that was filled with old glassware and a McDonald’s hash brown that I can only imagine was being saved by one of the dancers for later.

We eventually found our way to Jaime’s 1998 Jeep Cherokee in the parking lot. He asks me to wait while he cleans out the back seat. He removes more garbage, old clothes, textbooks, blender parts, shoes, a foam finger from a Dodgers game, and then finally, a large spare tire. Our renovated love nest was ready to inhabit. We crawled onto the synthetic orange carpeting that lined the back of the Jeep, and clothes were removed revealing the most beautiful penis I’d ever seen. I let out an “Ello Gov’na” and tipped my tiny invisible hat to its glory. Cue the movie montage of sex that happens over a 2-hour period but feels like 30 seconds. As third degree rug burn set in, with the smell of old French fries in the air, we each orgasmed and Marion Cotillard’s 2008 Oscar speech played in my head. “Thank you life! Thank you love! It is true, there is some angels in this city!”

And they say romance is dead.

We exchanged numbers that evening. But I avoided every text and phone call, wanting only to savor our one night together, to remember it as a wild fling I could tell my friends about, and then forget. His messages were thoughtful, and received cold detached responses from me. We would make vague plans to see each other that I would inevitably cancel on over and over, using fake excuse after fake excuse. We finally met for a drink, and as I sat across from this stranger, whose body I remembered so vividly, he opened up to me about his family, about past relationships, about getting his heart broken.

He wondered why I didn’t return some of his calls, but understood I was busy. I realized I was trying so hard to be the cool girl, this aloof sensual being that could move in and out of sexual scenarios without any attachment, that I totally disregarded someone else’s feelings. It is ok if things don’t work out, but I should have been honest with Jaime instead of avoiding him till he went away. Behind that beautiful penis and foam finger, is a human being with thoughts, emotions and expectations.

There is expectancy for young people to sow one’s wild oats before those oats dry up. To have fun, unadulterated experiences in order to really live a full and complete life, and unattached sex in the form of one night stands is part of that. But, as we sprain our thumbs swiping right on Tinder, or Happn or J-swipe or Coffee Meets Bagel, or some how end up meeting people IRL, in the search for some of those experiences, we need to try to remember that it’s okay to choose kindness and honesty instead of self-gratification. We all have stories of people we’ve met and really liked and then never heard from again.

Rejection is inevitable, but perhaps we can all help make it a little less painful.