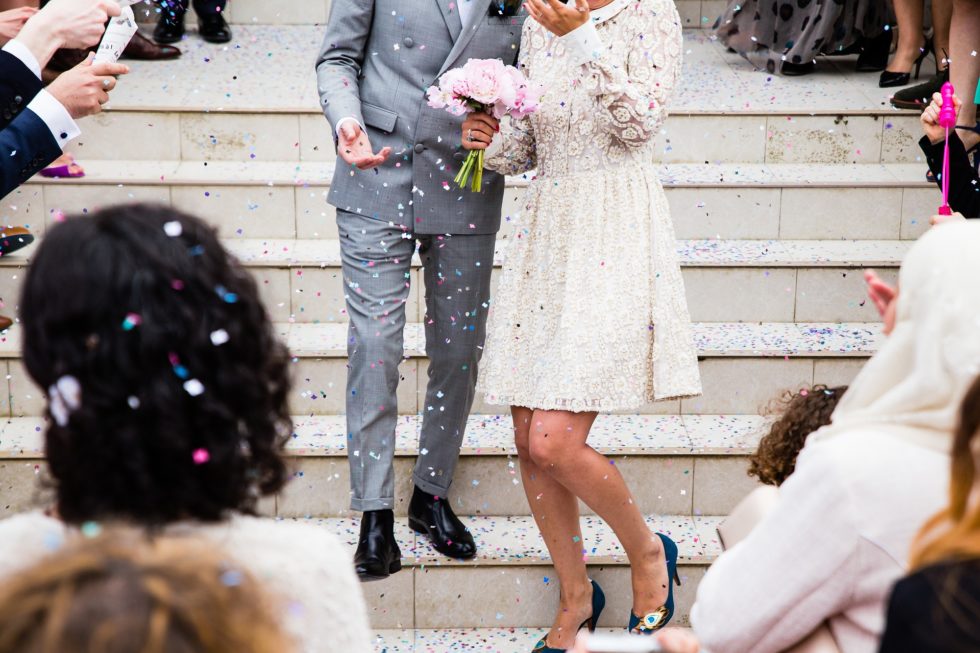 Like many families, mine is pretty nuts. The night before my cousin Sabrina’s wedding, I stayed over at her mom’s house with her. We sipped chamomile tea as her mom, Zia Vanina, assembled elaborate plates of cookies to put out after the ceremony the next day. Vanina, my 90-year-old Nonna, and a family friend had handmade the mountains of pizzelle, amaretti (Italian macaroons), candied almonds, raspberry-filled shortbread, rugelach, and six other types of tasty treats.

There were way too many cookies, so my aunt, who wouldn’t let me help, lest I mess something up, fed them to me to keep me from interfering. I was fine with that. One of my greatest talents is eating cookies.

After eating about 13 cookies, I looked at the clock: 11:09 p.m. A slight panic set in because I know I would not sleep if I continued on this sugar binge. I was trying to be a responsible bridesmaid, so I told my aunt no more cookies. She wiped her brow, shoved a pink amaretti in my face and said, “Carla, eat the cookie or go to hell!” I ate the cookie.

Tensions were running high before the wedding kicked off the next day, but with the exception of five family members almost missing the ceremony (thanks, Joe), it was lovely. My aunt walked her daughter down the aisle, and by the time they reached the altar, there wasn’t a dry eye on our family’s side of the room. It’s a magnificent thing, watching people you love, despite of and because of their craziness, in a moment like that. None of us could handle it.

After the reception, my cousins and I manned the cookie table, which was positioned conveniently after the receiving line. We’d recommend Nonna’s pizzelle to guests while sipping on the liqueurs that went with the cookies.

What came next was a mouth watering spread of cheeses, meats, calamari, and other delicious appetizers I couldn’t indulge in because I was off taking pictures with the rest of the bridal party. Some of those pictures were taken outside. November in Toronto isn’t exactly warm, and I refused to put on pantyhose, so my knees turned purple as the photographer hollered, “Lean in! Smile big!” May I just say that people take way too many pictures at weddings? TOO MANY PICTURES, PEOPLE.

After the outdoor portion of the photo shoot was over, I was on my way to the bridal suite we got ready in prior to pop a Klonopin, because I had a speech to do. A sweet looking older Italian woman, round of figure and soft of voice, stopped me. She was a friend of the bride’s mom or something.

“You all look so beautiful up there,” she gushed.

“Thank you. It was a beautiful ceremony,” I said.

“When are you getting married?” she asked.

I was confused. I wasn’t wearing an engagement ring. I hadn’t brought a date. I had just been doing shots of amaretto with my cousins by the cookie spread. Nothing about me said: BRIDE TO BE!

“I’m not getting married,” I told her.

“Oh, don’t worry,” she said. “You’re next.” She winked at me as she shimmied into the reception area.

Well, hot damn. Age-wise, I am next in line in this big family of late-marrying cousins, and not only am I nowhere near having my own wedding, I don’t know if I even want one. This normally doesn’t bother me that much, but looking around at the happy people laughing and celebrating my cousin and her husband, my stomach twisted and I started tearing up.

As soon as salad was served, I was up for my speech. I murdered that speech like Tony Montana on a coked-out shooting spree. Killed it. I give myself 17% of the credit for that, and the rest goes to Klonopin.

I sat down after my toast, and in a hazy series of, “Is this a nightmare romantic comedy of my mind’s own creation?” vignettes, at least a dozen distant relatives, paesans, aunts, uncles, godfathers and grandparents came up to me, all delivering some version of the line, “You’re next, right?” Was this a single-person aversion-therapy trick?

In response, I laughed a little too hard and said, “Oh, we’ll see.” Part of me wanted to yell at these people, but who wants to be the single, crazy, adult woman screaming at old, well-intentioned guests at her cousin’s wedding? Not this gal.

I did the only thing I could do, given the venue: I spent the rest of the night drinking and either goofing off in front of the photo booth or dancing. I danced all night long. I danced in heels that were not made for dancing, I made my cousins shake their booties with me, and by the time our 90-year-old Nonna got up to show the grandkids her sweet “squat and raise your arms” moves, we were all sweaty, exhausted, and happy.

The next morning, I woke up still single, still planning to move around, still unsettled, and thought about my cousin in her wedding suite eating Eggs Benedict and sipping champagne in bed with her new husband. I felt equal charges of envy and disgust pulse through me. I am fine with my life most of the time, but in those moments when others remind me of how far I am from the norm and from things that I maybe want someday but have no idea how I’ll get, my stomach drops and a nagging anxiety settles in. It hasn’t left yet.

I’ve been turning down invitations to eat delicious meals at relatives’ homes while I’m in town to avoid a certain line of marital questioning I just don’t want to deal with. I don’t know why I’m single. I’m open to relationships, but I won’t jump into one just for the sake of doing so. I’ve dated men long term, and I’ve dated them short term. I almost got married once, but thank Oprah, I didn’t.

I know they mean well, but when I do speak to family members and my parent’s friends who are curious about my lifestyle and marriage prospects, I end up getting a bit defensive and a lot bored.

Yes, Nonna, I know you had a husband and two kids at my age. Times have changed. Maybe one day.

Thank you, family friend, but I don’t want to meet your friend’s son. I’m sure he’s great and I totally understand that sometimes a grown man lives at home with his mother because she cooks like no other and irons his underwear, but still, no.

Oh yes, distant cousin on my father’s side, I do like kids. Sure, I want them, someday. Kids are awesome. Kids are way better than you are being right now.

A part of the reason why these questions sting is because I don’t need other people asking them to me, I ask myself the same questions regularly. I’m 31. A lot of my friends are married or almost married, and having babies. I’m a stalwart of the single life. I’ve been making the most of this, and my portable writing career, by city hopping for the past four years. I’ve met amazing people, and had wonderful experiences, but I’m still alone.

One of the reasons I loved living in Rome and New York so, so, so much is because you are never alone when you leave the house. Being constantly surrounded by many other humans provides a sort of weird, invisible humanity hug that a single person, and maybe all people, need to feel sometimes.

For now, I’ll take those humanity hugs where I can get them. I feel pretty great about being single, most of the time. Sure, I’d like to date someone seriously, but for the right reasons, not because I’m panicked about being alone forever. And definitely not because Uncle Marty’s second cousin’s son needs to move out of the basement.

Searching for Inspiration for Your Wedding: Where You Can Look and What You Can Use

4 Mistakes to Avoid When Planning to Propose to Your Partner

The Fling Before the Ring: Tips for Setting Up the Ultimate Bachelor Party

3 Key Things to Do Before You Decide to Get Married