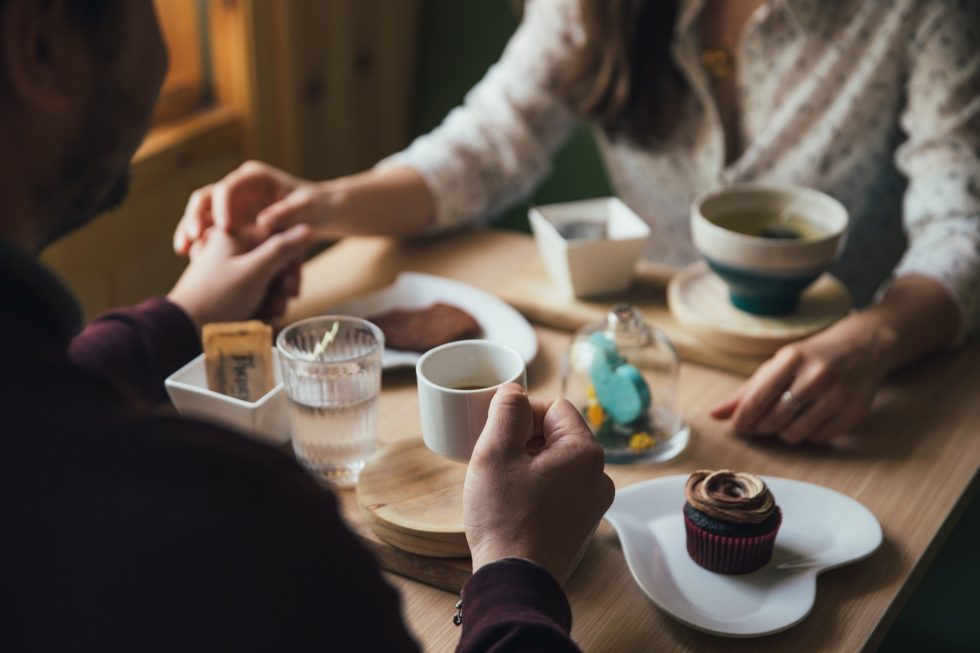 I recently signed up for the new-ish dating site Coffee Meets Bagel and “J” was my second date there; I had high hopes since my first “bagel,” as they call it, was a flop. J intrigued me because he’s a psychotherapist, though in retrospect, I think the emphasis is on the “psycho” part of that job title.

I had never gone out with a therapist before. Most of my dates have been with bankers, lawyers, etc., and since I am a big believer in therapy, I thought, “Hey, maybe he’s super enlightened and open-minded.” Wrong. Without any further background, I bring you…my 11-minute date.  Call me nothing if not efficient.

J picked the place; a little bar that was convenient for both of us (bonus points for him). He had already arrived, and as I walked up to him I saw that yeah, he wasn’t as cute as his photos, but the photos were him, at least.

I sat down, and immediately noticed he had a full beer and a glass of water. He kind of stared at me with a blank expression for a few seconds, so I began asking questions about what he studied in school, his therapy practice, what kinds of patients he sees, etc. He responded to everything with a twitch of resentment which, hello, is a HUGE turn-off. Thankfully, I find therapy fascinating, but I AM curious what he would’ve done if I didn’t lead the conversation. He didn’t ask me any questions; I took that as a sign that he was turned off by me. Eventually he started talking a bit more, wooing me with stories about how he hates LA, hates LA women, doesn’t like the beach. Then he said, “So you’re from New York originally? I’m from Iowa and I really don’t like New York.”

OKAAAAY — I consider myself a fairly accepting person, but if there is ONE WAY to get on my bad side quickly, that way would be insulting my home state. I guess being a born-and-raised New Yorker has given me the gift of being able to tell someone exactly where to stick it when they cross the line but, for some reason, I didn’t immediately rip him a new one. This was fascinating to me…kind of like an anthropological study on what not to say to someone when you’re already bordering on douchebag.  To my own surprise, I let his comment go and said “so…what kind of beer are you drinking?”  Mind you, at this point, it was pretty obvious that there was no waitress coming around and that one of us was going to have to go up to the bar and order me a drink…and it wasn’t going to be me.

J replied with “oh…just a Blue Moon…nothing special.”  “Do you like to drink?” he asked. “I do!  I’m feeling some wine tonight,” I replied.

J then said he had to use the restroom and excused himself.  It was at this point that I started to wonder why I was doing this to myself.

I started listing things in my head that I’d rather be doing: working on my blog, playing with my cats, cleaning my apartment, getting a root canal, waiting in line at the DMV, waking up and realizing that I have the Mike Tyson face tattoo from “The Hangover,” and the list gets worse from there.

J returned and started talking about how he really likes online dating, especially  Coffee Meets Bagel, because he feels it “narrows down the search,” which it absolutely does, but now I’m realizing that I need a bigger pond to fish from. I’m guessing he can see that I’m starting to lose patience, especially since I’m getting thirsty, and the waitress hasn’t even come around once, so I don’t have any water, much less a glass of wine.

Then he asked, “Do you like online dating?”  Well, shit. If someone asks me my opinion, they’re gonna get it.  “Well, to be honest, not really. I find it exhausting,” I said. “Really?!” he asked with the most excitement I’d seen all night.  “Yeah…it’s mostly just because you have to go on a ton of dates and most of the time the guys I meet are super-nice, but it’s not very often that you feel that connection, you know?” He looked perplexed and asked me to explain.  “Well, like OUR date. It’s clear that we’re not into each other and I spent a lot of time planning this, getting ready, etc. and it’s just frustrating after a certain point.”

By then he had a complete “what the fuck?” look on his face, which I kind of got…I mean, even if he wasn’t picking up on the “I’m not into you” signals, it’s not every day that someone is so confrontational about it. But I felt liberated.  “What do you mean?!” he screeched. “I thought we were getting along great, you’re really cool.”

Oh shit. Now I’m the asshole. I decide that I should probably explain to him how I came to this conclusion out of respect and also for the fact that it might help him in the future.

“Well, just one example would be the fact that you didn’t offer to get me a drink when you have a full beer and a water and I have NOTHING in front of me…that’s just bad manners.”

He quickly snapped back “I want to make something clear, I DO have good manners…VERY GOOD MANNERS, actually…I just don’t go around buying people drinks.”

“Ok,” I replied completely calmly, “but the fact that you have two drinks and I have zero isn’t polite…where I come from (bringing up the state that he supposedly dislikes), a man buys a woman a drink on the first date.  And even if we were just friends, you don’t think it’s rude for me to sit here with nothing while you drink your two drinks?”

And, here’s my favorite “argument” ever: “I believe in equality and I asked you if you like to drink,” he answered back.

“As do I, but I’m sorry, you’re just being rude. I’m more than happy to pay for my own drink but when you asked if I like to drink, I answered and you didn’t say “Hey, want me to open a tab for you?” or anything that would point me in the direction of you being such a male feminist.”

He looked embarrassed and was clearly still in shock, so I said “Look…you seem like a nice enough guy but, drinks aside, I can tell we’re not a good fit and honestly, I’d rather be home watching TV.”

“Well go then!” he angrily shot back.

“OK great!  Nice meeting you” I cheerfully said while getting up.

He started to get up as well and I quickly said “Oh no, please!  Finish your beer!” while gesturing toward the said drinks, and then walked out.

Jokes and negativity aside, like I said, there was something incredibly liberating about the fact that I assessed the situation, confronted him (while still being respectful), and then left a situation that I didn’t want to be in. I walked out of that bar in the BEST MOOD that I’ve been in all month, truly. I handed my ticket to the valet and he said “Wait, you just got here. I’m sorry, I still have to charge you the $5.”  I handed him a $10 bill, smiled, and replied “Keep the change!” I was high on life.

Sometimes it takes a really negative person to reboot your perspective and change your attitude. Do I still hate online dating? Absolutely. But after my date with J, I learned that I have to screen these guys a little more before agreeing to meet them.

I’m sure J will eventually find someone, and I honestly hope that me being so direct with him helps him on his future dates. I know that I’ve personally learned a lot from making my own mistakes, which is why I encourage everyone to be more honest in their dating journey. It feels amazing, saves time and energy and like I said: Call me nothing if not efficient.