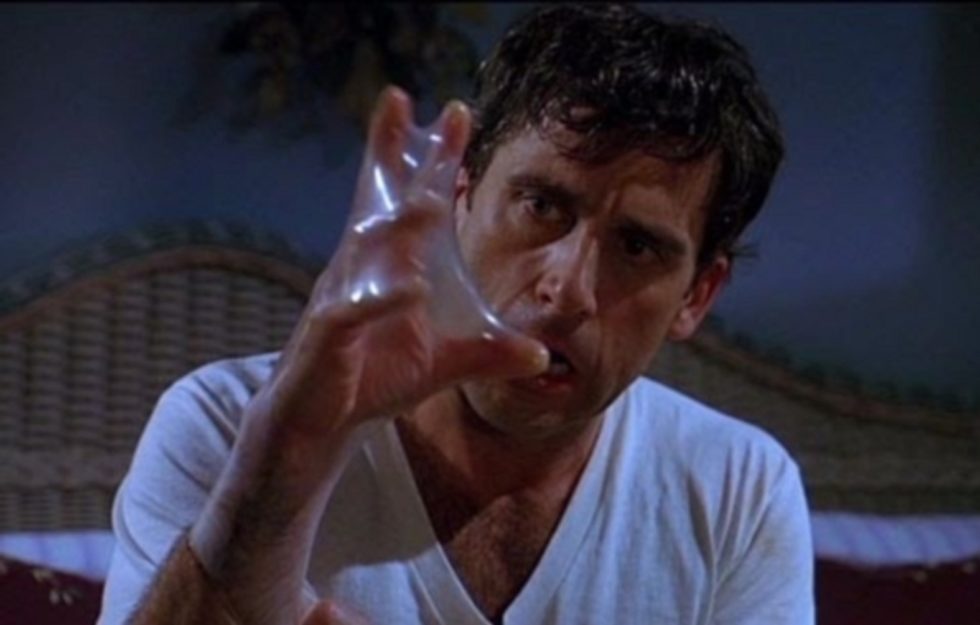 It seems that there is an ever growing stock of older male virgins out there. And if there isn’t, they are at least becoming more apparent. Thanks to the anonymity of the Interwebs and the movie, 40 Year Old Virgin, it has become fashionable for male virgins to present their case to the world and still remain anonymous.

The web is full of male virgins. I was also part of this club just over a year ago, finally being deflowered at the age of 27.

There is no reason for a guy to remain a virgin into and past his late 20s. The only real exceptions would be some major physical or mental handicap, but that would make up only a small minority of the male virgin population. Most of these guys are your normal average everyday men. Yet, for some reason they just can’t figure out how to get laid. You would think that after so many years, a guy would at least get a little random action or even a pity lay. No, there is something else at work here.

For those not familiar with the Alexa ranking service, the lower number the ranking is, the more traffic that site receives, for instance, Google is #2 and this blog is #259,388. So, judging from the chart below, there is clearly a high demand for pornography.

When you are able to easily satisfy your needs without the hassle of being rejected by women, then there leaves little motivation to improve oneself. And improving oneself in life is a key component for males gaining the attraction of females.

It seems to me that the longer a male stays a virgin, the more difficult it becomes to lose it. To illustrate, see this crude line chart below: 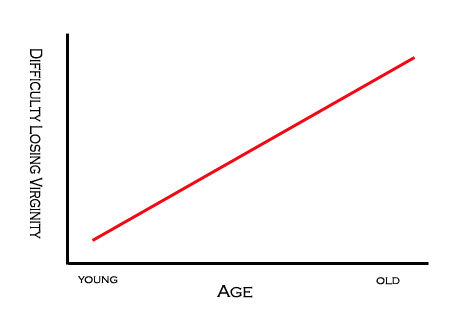 My theory is that as male virgins become older and older, they begin to doubt their ability to get laid, thus perpetuating a downward cycle of less and less confidence. Of course, the catch 22 being that confidence is a main ingredient in attracting women.

When a guy is young he can blame his lack of sex on simple bad luck. However, as time goes on, the male becomes self conscious, he questions his looks, he begins to blame society for his faults and eventually his self esteem is shot to hell. Perhaps he will be so discouraged with his situation that he gives up completely. He’ll turn 40 years old, have the appearance of a nice guy, but deep down inside, he’ll have a hidden resentment towards women.

“Be Yourself” – Worst Advice Ever

I think there are some male virgins who simply receive poor advice on dating and are lacking the basic skill set of attraction. This one is not a theory either, just go to any dating advice forum and take a look. You can see clear as day from the posts that most guys, often virgins, are simply clueless on things like confidence, body language, flirting, approaching and how to hold a conversation with women.

Concepts like “be yourself” are terrible for a guy who has absolutely no clue about women. It’s like saying, “oh well, just keep on doing the same things over and over, even though you don’t get any results, and hopefully some day you’ll get lucky.”

It could be that these guys are getting their advice from the wrong sources. For them, it could be a matter of simply learning the fundamentals of attraction.

Self Sabotage and Fear of Success

Before I lost my virginity, I had this one thought process that didn’t make much sense. At the time, it did make sense and it went something like this:

This girl really likes me and I really like her. She’s an amazing person and definitely long term relationship material, quite possibly THE ONE. I know that if I asked her, we could be dating right now… but, herein lies the problem. I’ve never had sex with anyone and if I end up Marrying this girl then I will have only had sex with one woman my entire life. I want to at least have sex with multiple women in my life. Therefore, I will not pursue this girl until I’ve had sex with other women.

Isn’t that messed up?! I probably had about twenty of those scenarios throughout my life. It was a matter of self sabotage and a fear of succeeding. It’s almost like another catch 22. I know it’s a messed up way of thinking and I’ve changed that now. However, I’m willing to guess that there are other male virgins out there with very similar thought processes.

Climbing Out of the Pit of Despair

So, with all these dilemmas what’s a male virgin to do?

Finally, for you guys that are older, the guys who are in your 30s and 40s, do whatever you have to do to get that first lay out of the way (legally of course), even if it means having a fling with a woman your not too crazy about. Getting that one first time out of the way is like lifting a ton of bricks from your back. And getting that one first lay will be enough to break the curse.